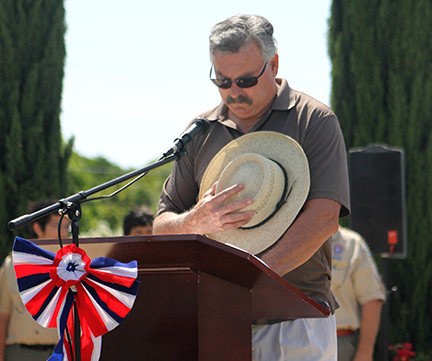 During Tuesdays Oakley City Council Meeting, Vice Mayor Doug Hardcastle announced that he will be retiring effective November 12 in an effort to enjoy the fruits of retirement.

During Council comments, he issued the following statement:

November 12 will be Hardcastle’s last day as a councilmember which he said he hopes it gives Oakley time to go through a process of seeking a replacement to fill the remainder of his term.

According to City Manager Bryan Montgomery, he explained Hardcastle let him know prior to the meeting and assuming the council will not call for a special election, on the next agenda they could call for an appointment giving the applicant 1-full year on the council to complete his term.

“We have a template, we have a process and for some reason on October 9 you decide not to do the appointment, but do the election, we can shift gears,” said Montgomery. “Let’s see who might be interested to replace the vice mayor.”

Montgomery further highlighted with the timing of the resignation, Hardcastle could participate in the process of selecting his replacement—including interviews.

Mayor Claire Alaura confirmed that they will have this topic on the next agenda to have an “official vote” and said there was no harm done in starting the process now.

The last time Oakley made an appointment was when Vanessa Perry was selected after Diane Burgis resigned after being elected to the East Bay Regional Park District. She has since been elected to the Contra Costa County Board of Supervisors.

First off, I didn’t always agree with Hardcastle, but he worked hard. Sometimes I wondered where his head was at, other times he brought reason to the council and shared opinions that brought better policy to Oakley. For that, thank you Mr. Hardcastle. I wish you well on your retirement and good health.

As for Oakley, this is another screw up on a very long list.

On Wednesday night, the city of Oakley already posted they are seeking applications (due by November 7) and interviews will be on November 12. If you want an application, you can visit the city website or email [email protected].

The call for applications is a bit premature as no formal vote from the council was taken on whether or not to call for a special election or applications. While Mayor Alaura says there is no harm in starting the process—yes there is, because the public has not had a chance to weigh in and only staff and the council had this information prior to it being announced and was not on any agenda. Yet a decision was already made?

With the sale of his business, it was well known to insiders Hardcastle was looking hard at retirement, it was just a matter of when. Would he finish out his term or not.  The move now creates an unfair advantage in the upcoming election for whoever is appointed as anyone who pays attention to elections know that incumbents typically stand a better chance of winning due to name recognition.

Regardless of an election in 2020, for the next year, this person will likely be the swing vote on many important items, thus, its even more important for the city manager to get “his person” appointed who will vote to keep his job security in tact and push through items he wants pushed. He is not going to want the council to appoint the “third vote” to fire him.

Why does this appointment matter so much, it has implications as Oakley is moving into a year where it begins its General Plan revision. If this plan and process is weak, and all indications are at this point it will be, it is the city’s guide for the next 20-years.

You may also recall, earlier this year the city council approved an erroneous “election protection” clause in his contract that went along with his 4% raise.  It basically protects Montgomery within 90-days of an election and 180-days from the date of an election which grants him an additional 3-months of pay which jumps from 6-months to 9-months—a total of $179,995.

I’ve already confirmed from multiple sources the Hardcastle resignation will result in Kevin Romick jumping to Mayor and Sue Higgins to Vice Mayor.  This will impact the 2020 election as Romick will now be running for reelection as Mayor. Perhaps a better solution, place the two not running in 2020 as Mayor and Vice Mayor (Higgins and Pope) and reset the rotation so it does not provide an unfair advantage in the 2020 election.

Finally, if this was already decided, which should only happen during the seating of a new council, a Brown Act  likely occurred, or the fix is in.

This is exactly why this Council and city manager cannot be trusted in an appointment process and the city should waste the money on a special election—even if it is a mail ballot.

The voters should have a say in this process given the back-room politics at play in Oakley.

City of Oakley Names Dean Capelletti as Next Chief of Police