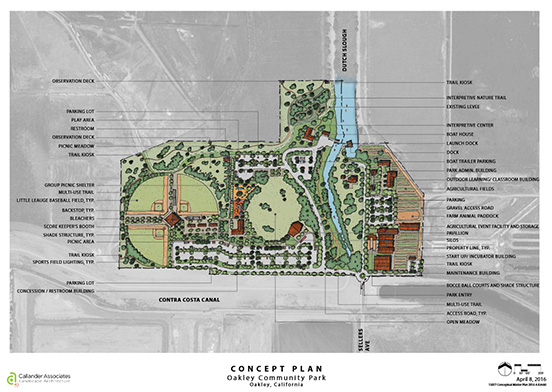 At the November 8 Oakley City Council Meeting, the City Council agreed to a Landscape Architectural and Master Planning Services for the 55-acre Oakley Community Regional Park.

The council approved the item in a 4-1 vote with Councilmember George Fuller dissenting saying he didn’t see the value of the park and suggested they turn it into affordable housing or senior living. With council giving the approval, the community outreach will begin in February 2023 to allow input on an updated plan for the 55-acre park.

The item was in the Consent Calendar and is one of the key CIP projects in the city. The project seeks to transform a 55-acre site at the north end of Sellers Avenue that was deeded to the city as part of the development agreement related to the Emerson and Gilbert Ranch subdivision project.

Fuller sought to see if the city could get out of the agreement and charge the purpose of the property to housing or give back a portion to tribes (see full commentary below).

According to the staff report, the city of Oakley attempted to get Proposition 68 funding, but have been denied twice.

Councilmember Anissa Williams pulled the item from consent because of her concern over the amount of money they have spent on this project and still do not have a plan. She wanted them to create a plan for the 55-acre park and stick with it so they can request funding.

“At this point, we are spending a lot of money on it and we still don’t have anything and are not reaping any of the rewards from it,” stated Williams.  “I can see great economic benefits if we plan this correctly but I want some assurance that we are going to complete this process because we need this to be able to go out for grants.”

Kevin Rohani, P.E., Public Works Director/City Engineer, agreed saying they started this project 6-7 years ago and a lot has changed and with the new council set to be in place it was an opportunity to revisit that site.

“It is very important for us to finalize a plan, and we will finalize it,” said Rohani. “We are putting a lot of emphasis on public outreach, reaching out to everybody, workshops from all stakeholders and a wide range of perspectives from folks who want to ride bikes, ride horses and everything in between and collaborate for a master plan and brought back to the council. Once approved, we are not going to change this thing. We want all councilmembers input.”

Rohani said as far as the $500k goes, that site used to be an old dairy facility and they spent $400k to demolish and remove failed and deteriorated structure that were safety issues—a big chunk spent was to clear the site to make it safe until they secure funding.

He said they would pursue funding for specific sections.

Rohani said the process would begin no later than February 2023 to seek out public input.

Councilmember George Fuller questioned the value of the park because they have a large park at Big Break Regional Shoreline and pay to maintain it and staff it.

“Yet within 2-miles, we are discussing another regional park and I am sitting here asking why are we doing this. Yes, I discussed with the city manager we received it under covenant that it would go to a regional park. It was back in 2016 but now I am looking post pandemic… why are we going to encumber ourselves with developing yet park and paying for it.”

Fuller said he understood the agreement was they couldn’t build homes north of the marsh but questioned how strict is the agreement and could they build houses.

“Are we making the wises decision to put together a regional park?” asked Fuller noting they already have baseball and soccer fields in Oakley. “My thought is we need to examine this, how strict is the covenant or what would happen if we turn this into a retirement villa for people to reside in or retire in that would be affordable to them. How would that come about?”

He suggested if they can’t build on it, could a developer purchase the land for repurpose or another use. He also asked if they could allow the city to give some of the land back to tribes to use as tribal lands.

“It’s a beautiful piece of land… and I understand staff was following council direction but I think I would like to discuss in a work session to discuss our alternatives before we approve the item,” said Fuller.

City Manager Josh McMurray said Fuller was asking a lot of questions they did not have answers for at this time but could look into it.

“In terms of the decision the council has tonight, we are at the discretion of the council and what their pleasure is on the item. You can approve it, we can wait, it really is at your pleasure and staff is just waiting on some direction,” said McMurray.

Oakley discussed the idea of utilizing the 55-acres for a polo field.

Vice Mayor Sue Higgins said she doesn’t mind waiting but noted that property is where she wants her equestrian park or polo fields and things that don’t have soccer and baseball in them but they could use them.

“That is what this park is about, its more uses that we don’t have in other areas,” said Higgins. “You have got that big home that we thought could be a wedding or recreation building in a different settings. It has a lot to offer out there in terms of nature that you see at East Bay Regional Parks.”

She said they needed to bring the public in and have the workshops to help develop a plan and let the public help decide—which is what the action they took tonight would do.

“If you want to wait, we can wait, but I think it’s a really great idea,” said Higgins.

Rohani clarified saying they haven’t named the park other than Oakley Regional Community Park and were sure they could find a “cooler name” for it in the future. Then he stated comparing it to the East Bay Regional Park is just semantics and not comparing apples to apples but in terms of recreation and general public, its very limited.

He urged the council not to get tied up on the name of “regional” because its not been named yet.

“There really isn’t full features and it’s a beautiful site, but this park… is a feature packed park with a lot of components,” said Rohani. “On a daily basis, our department is asked by leagues for parks and fields. Despite all the parks we have, the number one request we get is are soccer field vs baseball field. We have converted our storm basins to fields such as Freedom Basin and by the dog park to make it work, but we don’t have a high class full featured athletic sports field like Brentwood has at Sunset Park. A full feature packed park that is a destination. The goal was to make this site to be a destination so people come far and near.” 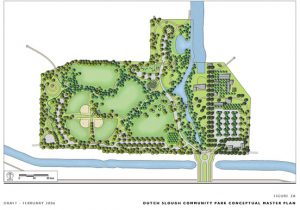 Mayor Randy Pope noted they used to call it “the 55-acre park” and said this park had drawings 12-years ago and even plans he didn’t like.

He explained in 2016 they redesigned it, did tours of the facility and saw things they wanted to preserve, maybe could have educational component, access to water and it all came down to funding.

“We have to have a plan to ask for funding,” said Pope. “Another majority change has come up on council and have asked to review this, that is what this is. This is to reach out to all stakeholders for multiple workshops to develop a plan for the future of the park. This is it, this is what you guys asked for. I won’t be on the council but the city has changed from the time I was first elected, its almost doubled in population, its changed since 2016 since we did this plan. We need to revisit because the ideas we thought back then, I don’t think they are great today. I don’t think they fit the current Oakley or future Oakley. It needs to be active recreation for a growing city and growing demands.”

Pope stated this is an opportunity to respond to everyone saying they need something for the kids to do. He was in favor of this item and hoped the future council developed a great plan.

Williams then made the motion to move forward with Councilmember Aaron Meadows offering a second.

Fuller called for an amendment requesting the item be tabled so staff can look into how locked in they were for a park and look into the possibility of housing. He also wanted to see if staff could look into any penalty of changing the use of the land.

Pope stated that did not sound like an amendment but an alternative motion and was “totally changing what her motion was”.

Fuller requested they hear from legal.

Oakley’s legal team said Fuller was issuing an alternative motion and the council would first have to vote on Williams motion.

The council then voted 4-1 with Fuller dissenting.

The council then took up Fullers motion to table, with no second, the motion died.

Fiscal ImpactApproval of this resolution will accept the proposal and authorize the City Manager to execute a design agreement with Callander Associates for a cost not to exceed $74,756. The funding for this project will be provided from the Community Park Fund. The original funding allocation for this project started in Fiscal Year (FY) 2016/17 and has continued into FY 2022/23. As of October 2022, a total of $3,575,000 has been allocated for this project funding from the Park Impact Feeand a total of $547,904.58 has been spent over this timeline of the project

One Dead in Early Morning Vehicle Crash on Bethel Island

Yeah. Why should we have parks when there’s developer money there for the taking? Heck with parks. Take a walk around the block