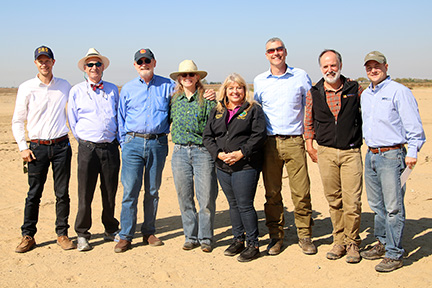 On Wednesday, the Department of Water Resources (DWR), along with state and local partners, celebrated the groundbreaking of the Delta’s largest tidal wetlands restoration project. The Dutch Slough Tidal Restoration Project will re-establish a rich ecological network that will boost survival rates of endangered fish and wildlife while also protecting neighborhoods against flooding. 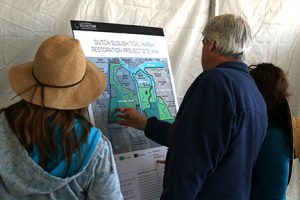 Located on the Delta’s western edge, the Dutch Slough Tidal Marsh Restoration Project will transform 1,187 acres of a former grazing area into a rich habitat for fish and wildlife. The project is part of the California EcoRestore Initiative, a multi-agency endeavor to restore more than 30,000 acres of wildlife habitat in the Delta by 2020. EcoRestore marks the Delta’s largest-ever restoration program.

Tidal marsh elevation requires land that gradually slopes upward. In May 2018, DWR began moving dirt from higher elevations to lower elevations, so that water can eventually flow in from the Delta channels and out with the daily tides. The project is expected to be completed once the levees are breached in 2021, and native fish and wildlife can populate the area.

Once completed, Dutch Slough will serve as a regional park with hiking and bike trails. Visitors will be able to learn about biology and history through interpretive signs. This vast marshland will take visitors back in time, to a vibrant ecological wetland reminiscent of the Delta of the early 1800s. The site will also provide flood protection to nearby housing, guarding against rising sea levels triggered by climate change. 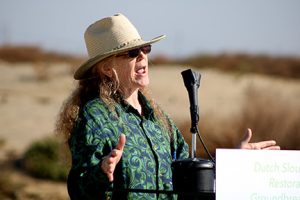 Patty Finfrock, Program Manager for the Department of Water Resources extended her thanks to many people over the years for making this project a reality while highlighting the importance of the project, however, she urged people to look back in history of what it might have looked like.

“I want you to just take a minute to envision what this looked like. 150 years ago, everything to our west was sand dunes and oak woodlands and everything to the east was tule marsh. 30,000 and 50,000 acres of marsh were here in the delta. They went all the way from Sacramento to Stockton and the best estimates are only 2-to-5 % of those are left, so we’re gonna bring back just a little bit of that habitat,” explained Finfrock.  “There so crucial to native species here in the Delta, so on behalf of all of the critters, everything from tiny microorganisms that now live in the water and in the soil all the way up to a kid that comes out here with a school field trip and gets excited about science, I want to thank you very much for making this happen.” 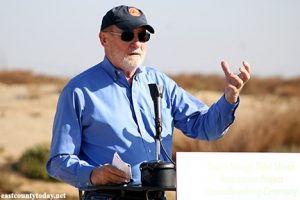 California Natural Resource Agency Secretary John Laird explained how this was not an easy project to begin because they had to coordinate with all the agencies both locally and at the state level.

Deputy Director Christopher Tiernell of the Department of Water Resources called the delta a “living laboratory” because the tidal marsh will inform generations of scientific study and adaptive wetland management in California.

“What’s exciting to me is that the Dutch Slough project is really the quintessential example of pursuing until filling that kind of responsibility. It’s more than a thousand acres for salmon and other native species,” said Tiernell. “It’s not required by any sort of mitigation responsibility… it would have been very easy and in many ways very reasonable to walk away from it. It’s been an exceedingly difficult project to implement from what I understand and as the secretary mentioned, that’s true for all these types of projects, but that didn’t happen. We’re here today celebrating the groundbreaking that happened earlier this year.” 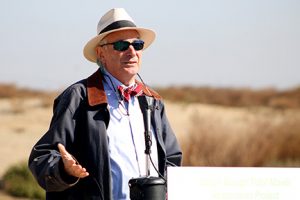 Sam Schuchat, Executive Director at the California State Costal Conservancy noted how they have been involved in the planning process of Dutch Slough for 17-years and now are working with the City of Oakley on a 55-acre community park next door to this project.

Contra Costa County Supervisor Diane Burgis highlighted her years with Friends of Marsh Creek highlighted how back in the 1950-1960’s the creek would flood often before it got turned into a canal and became an efficient conveyance system to get the water out and protect the important farmland.

“It’s now something people value,” says Burgis. “It’s valuable because it has now turned into something that affects our water quality, our drinking water. It’s a habitat for our critters, riparian habitat. We have a fish ladder here on marsh creek… we’re kind of undoing some things that humans did before that they didn’t realize was going to have a bad effect on our environment.”

She explained that 12-years ago she took the executive director job with Friends of Marsh Creek and was told the 1,200 acre wetland restoration was going to start in the next year, now its 12-years later and its just now starting.

“It’s going to contribute to the economy and the people living here in Oakley. It’s going to create a place for more people to learn, honor and appreciate our delta,” said Burgis. 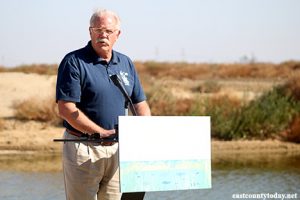 Oakley Councilman Kevin Romick spoke on the history of the project explaining how the Emerson and Gilbert properties made up the land for the project while a 14-acre property managed by Matt Cline produced 55-tons of grapes.

“The Emerson property was contra Costa’s last dairy operating from 1913 until 2003. The Gilbert Burrows properties were also dairy from the early 1900’s until about the mid-1970’s and they were managed as grains is range land for the last two decades in 1990 as the population surge in Contra Costa,” explained Romick. “In 2003, the Emerson, Gilbert and Burrows families rethought their legacy and sold their property, 1200 acres, to the California Department of Water Resources as their legacy shifted from asphalt to houses to open space trails, marsh habitat restoration, salmon, black tail, and hawks for the City of Oakley.”

Romick said part of this restoration will result in a 55-acre park land for the City of Oakley and would preserve the rich agriculture heritage left by the families. He also highlighted although Oakley is just 16-square miles, it has 20% is open space and park. 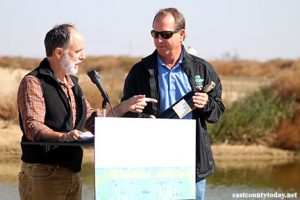 John Cain, Director of Conservation for California Flood Management at American Rivers discovered the ecological possibility of the site in 1999 and convinced local leaders that tidal marsh was the best use for the site.

Cain piggybacked off Romick’s comment about why the families sold the land to the State was because he thought they thought it was the right thing to do.

“These families listened with an open mind and took a risk. They were fairly compensated, but they didn’t hold out for the highest price,” said Cain. “I think why they did it is they thought it was the right thing to do and the state was prepared to make it easy for them to make the right decision.”

Cain continued, “I just want to share my hopes and beliefs that this project is an early step in our collective efforts to restore the Bay Delta watershed for future generations. The Department of Water Resources is working with local flood management agencies to give rivers more room to better protect fish, wildlife, and people against the risks of climate.”

Mike Roberts, special assistant for Delta Restoration for the California Natural Resources Agency, highlighted how they have broke ground recently on more projects than the past 10-years combined and that was due to dedicated staff.

“We’ve made a ton of progress. We’ve broken ground on about half of the projects that made up that original list for the ECO restore initiative, but we’ve got about a dozen more to go that’s still need your help, so please stay the course with us and I’ll just finish again with a congratulations to everyone that’s helped make this project happen,” said Roberts.