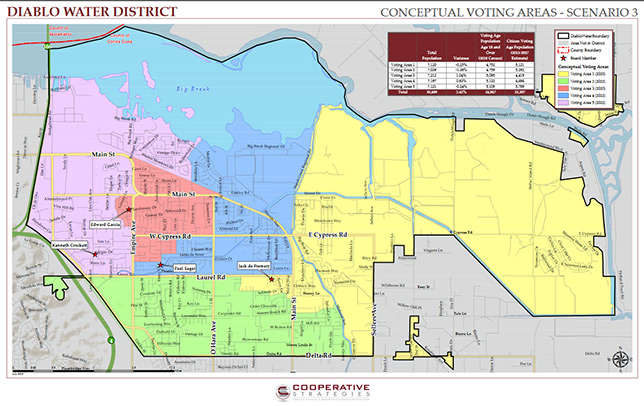 On Wednesday, the Diablo Water District is seeking input on potential district maps as they move from an at-large director election to a division director election which would impact the City of Oakley and community of Bethel Island and a small portion of the Town of Knightsen.

According to their agenda, they have provided 6-potential district maps, which in every scenario places the “white vote” well ahead of every other minority. Sadly, this is important under the  Federal Voting Rights Act which was the reason many cities and school districts were required to move forward to District elections—Delta Diablo appears to be going backwards on that trend to ensure the “white vote” stays the majority.

Of the 6 potential maps (30 districts created), every District has a population where the “white vote” is majority—the whole point of moving to Districts, was to create more balance with the minority populations and keep like-minded communities together under the Federal Voting Rights Act.

Aside from MAP 6, for whatever reason, most maps and districts are splitting up like-minded communities and ignoring man-made and natural geographic features.

Which under the Federal Voting Rights Act, the District should be created following the criteria which includes:

Editorial Comments on the Maps:

It would appear there is some gerrymandering going on because why else would they include maps and specifically point out where each director lives. They are ensuring each District has a current director living in it–minus the District where a director recently resigned.

In fairness to the District, based on the Oakley population numbers, it is near impossible to ensure a minority group could earn a seat because Oakley’s minority groups are spread throughout the entire city.

Which is why for starters, going to Districts prior to the 2022 Census Data is a waste of time and money. Every city, school district or special district is going to have to redraw their maps anyway.

Personally, the idea of going to Districts in any City, School District or Special District under 100,000 voters is pointless–the Diablo Water District is at just 35,000 population.

In Oakley, for example, this is problematic because of all the construction out on E Cypress towards Summer Lake, you automatically will see shifting of Districts.  Remember, they are building these maps off 10-year-old data at a time when Oakley had 35,432 residents. Today, it is estimated the City has around 43,000 people.

It would be prudent and tax-payer friendly to hold off on creating Districts until after the 2022 Census Data allows them to create more accurate maps for better representations of the voting public.

In observing these maps, you appear to have directors who are moving to Districts in an effort to protect their own seats for the next 4-years prior to new census data being released which would show many of these directors would run against one another.

Here are some quick thoughts on each map. 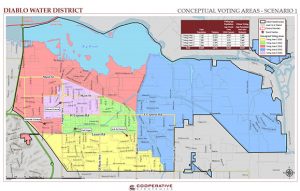 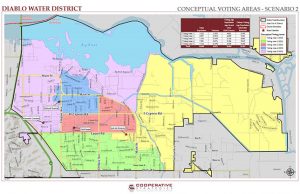 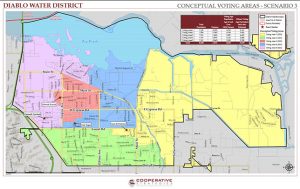 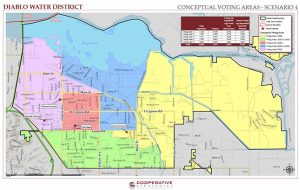 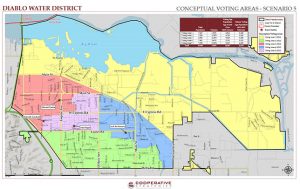 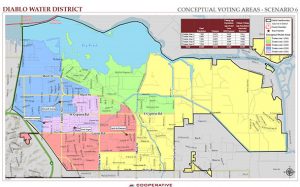 The Diablo Water District will meet on July 24 at 7:30 pm at the District Office located at 87 Carol Lane in Oakley CA.

The District is asking for input by either showing up to a meeting to speak publicly, or you can mail them comments by writing:

For those with comments, there is also no contact information for the board members on the website so we would encourage you to email the general manager directly at [email protected]

To see the agenda and full drawings of the maps, click here.

I look forward to hearing more of your thoughts about what you like and dislike about how DWD is run and conducts its business.

Regarding the by-district election maps: I must state that I was the only director to scoff at the notion of districts being drawn to preserve our incumbencies; I believe the concept of gerrymandering on the basis of self-preservation is unethical. IMO if districts are to be drawn; they should be drawn by a committee of The People and voted on by the public.

With that: Scenario/Map 6
-does not “protect” my incumbency, it will pit me against the highest vote getter in 2018.
Scenario/Map 6 Trustee Area 2 -preserves the continuity of Vintage Pkwy neighborhoods,
Scenario/Map 6 Trustee Area 1- puts together areas of concentrated well users [COI-Community of Interest]… Nearly all well owners in our district are facing developmental pressure.
Many well owners that live and vote in our district have complained to me that the wells that they own for home usage are suffering as Oakley grows East and South. [I have stated this concern, for the record, at the March and April Diablo Water Board of directors pre-mapping hearings]

I would appreciate anyone sending comments regarding anything of your interests or concerns; an especially the maps to the District email as provided by ECT or come to the meeting tomorrow night at 7:30pm.

In the name of transparency: I am proud to have got the DWD to post staff reports on the districts’ website AND at multiple meetings I have proposed live-streaming or taping and posting DWD meetings for the public to see how business is conducted… which has not solicited one single comment from anyone! This is a problem.