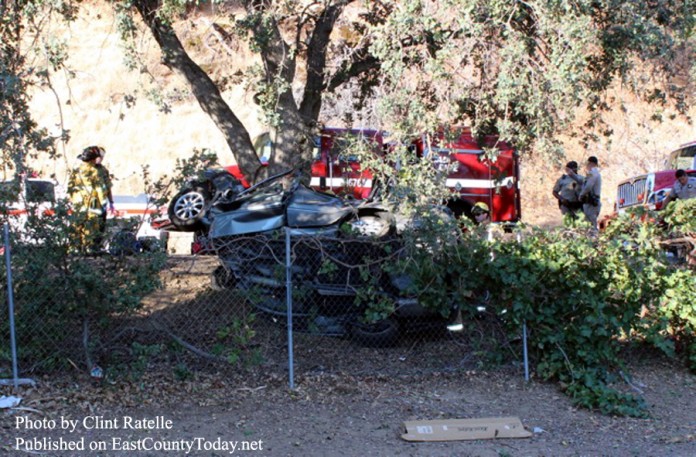 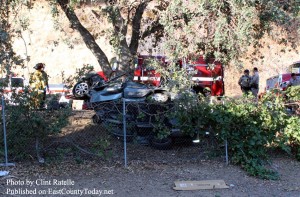 At roughly 8:15 am,  a police chase resulted in a vehicle into a tree car crash that killed one and seriously injured two others  in front of a mobile home park. The incident required both engines 52 and 54 in Brentwood along with Sunshine Station response along with AMR and two helicopters.

According to radio traffic, the incident requires extrication and one of the patients was having rescue breathing performed.

At 8:34 am, the first patient had been extricated.

There are also several reports that the vehicle was a stolen Lexus and two people have been arrested at gunpoint on scene. Traffic is blocked in both directions and vehicles coming from Brentwood are being redirected onto Deer Valley Road by an Oakley Police vehicle.

At around 8:50 am, one person is confirmed dead. Two others are suffering from serious injuries.

At 9:38 am, a second person was extricated from the vehicle.

At 9:48 am, all patients were reported extricated with coroner on scene. Fire crews will be on scene for another 30-minutes or so picking up their equipment.

This morning at about 8 o’clock, Deputy Sheriffs were following up on a call regarding a suspicious vehicle in the area of Walnut Boulevard and Camino Diablo in East County. Upon arrival, a Deputy determined that the vehicle, a Lexus, had recently been stolen from the city of Concord.

As the Deputy tried to make contact with the driver, he fled, leading Deputies on a pursuit westbound on Marsh Creek Road. The pursuit covered over 7 miles. In the area of the Clayton Regency Mobile Home Park, the fleeing vehicle apparently lost control and crashed into a tree. The 3 occupants (including the driver) were trapped in the vehicle. The Fire Department had to extricate two of them.

The driver was pronounced deceased at the scene. He is not being identified at this time. The two other occupants were taken by medical helicopter to John Muir Medical Center in Walnut Creek. They are said to be in critical condition.

The Contra Costa County Officer-Involved Fatal Incident Protocol was invoked. The incident is being simultaneously investigated by the Office of the Sheriff and D.A.’s Office. The California Highway Patrol is investigating the collision.

According to the Battalion Chief Report: