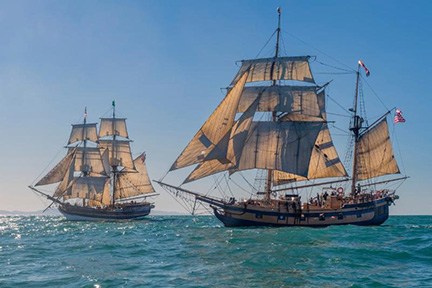 Antioch, CA – History will come alive in Antioch this March as the tall ships Lady Washington and Hawaiian Chieftain make their return trip to Jack London Square. The tall ships, part of the Washington-based nonprofit Grays Harbor Historical Seaport, sail the waters of the Pacific each year offering educational programs, free deck tours, and sailing trips for a few hours or a few days.

From March 27th – March 31st, Lady Washington and Hawaiian Chieftain will be docked at Antioch City Marina (5 Marina Plaza). On weekdays, schools can reserve a trip aboard the tall ships for the Historical Seaport’s one-of-a-kind maritime heritage field trip Voyage of Explorers. On weekends the tall ships are open to the general public for ticketed Adventure Sail, Evening Sail, and Battle Sail events. For the seasickness-prone but curious, stationary dockside Vessel Tours are available Tuesday – Sunday for a $5 suggested donation. Lady Washington and Hawaiian Chieftain can also be Chartered for private events including weddings and workplace team builders.

Launched in 1989, Lady Washington is a replica of the first US flagged vessel to make landfall on the West Coast. She has appeared in several motion pictures and TV shows, including Pirates of the Caribbean: Curse of the Black Pearl, Star Trek: Generations, and ABC’s Once Upon A Time. The steel hulled Hawaiian Chieftain was launched in 1988 in Lahaina, Hawaii. Together these boats are among the most active tall ships in America, visiting approximately 40 ports each year.

The tall ships offer a glimpse into our historic past, introducing people of all ages to the sights and sounds of 18th and 19th century maritime life. But Lady Washington and Hawaiian Chieftain also create moments to examine our contemporary world. As Senior Captain Michael Kellick puts it, “Our programs are as much about the future as they are about the past. Your place in history is between the two – it is now.” On the ambassadorial role the tall ships play in the communities they visit, he adds “Our purpose is never to just go from one port to another, but rather to go from where we are to where we need to be and become better people in the process. We will arrive together.”