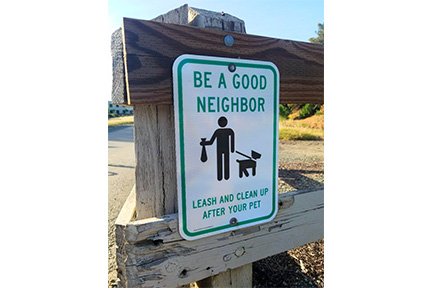 East Contra Costa County is encompassed with many miles of multipurpose trails, acres of beautiful parkland, and swaths of wide open space. Offering a wide range of scenic backdrops and beauty, including grassy plains, rounded foothills, and access to the waterfront, these trails provide stunning and visually striking views of the scenery and allure of East County, as trail users may enjoy many activities such as walking, running, hiking, biking, and for enjoying quality time with family and pets.

However, the use of the trails for pets and their owners has been a noticeable cause of concern amongst other trail users due to uncollected pet waste. And it is an ongoing problem that continues to persist in many places.

Often times, pet waste, either bagged or unbagged, can be seen alongside many trails, at parks, or even in residential areas, leaving a visual eyesore and a foul-smelling, odious mess on trails or sidewalks. As a result, trail users are then forced to carefully negotiate around piles of excrement to avoid stepping in it, resulting in a potentially bigger (and unsanitary) mess. Despite numerous signs and pet waste bag dispensers posted in many areas explaining in detail that pet owners must clean up after their pets, these rules have largely gone ignored, as some pet owners inexplicably refuse to clean up their pets’ waste.

“Dog owners are a large user group for Regional Parks and we need their help to keep parks clean and safe,” said East Bay Regional Park District Public Information Supervisor Dave Mason. “We ask dog owners to be respectful of the rules, including properly disposing of waste.”

According to Mason, there are many responsible pet owners who will take it upon themselves to clean up not only after their own pets, but as well as other people’s pets by removing bagged or unbagged waste off the trails. Still, pet owners not cleaning up after their pets or leaving bagged pet waste behind on trails continues to be a major issue in District Parks.

“Do they think someone else will be by to clean up after their pet?” asked Bay Area Dog Owner Stacey Frost. “Being a responsible pet owner means being responsible for all of your dogs’ actions, not only having them on a leash or having them licensed, but it means having a supply of bags to clean up after your dog any time they are not at home. We cannot control when our pet needs to go to the bathroom, but we can control what happens after they do.”

Any person having the ownership, custody, or control of any animal which defecates on public walks, in public recreation areas, in public buildings, or without the owner’s consent on private property, shall immediately remove the excrement from any such place to a site not prohibited by law. (Ord. 80-97 § 2).

The ordinance goes on to state that restrictions shall not apply on horse trails, possibly due to the fact that horse waste, while bigger in size and therefore much more visible on trails, is considered to be less harmful than dog waste, due to a horse’s herbivorous diet and thus carrying less harmful pathogens in their waste.

On the contrary, uncollected dog waste may serve as a vector for disease due to increased harmful bacteria levels and pathogens they carry, and waste leftover on trails could potentially lead to water quality impacts in and around creeks.

“Leaving dog waste behind not only leaves a mess that others and their pets can step in, it also leaves a waste that breaks down to pollute our water sources with diseases such as salmonella and E-coli,” added Frost. “It also can expose other dogs or people who encounter it to a variety of things such as worms, Giardia, and even parvo, a disease that can be deadly to dogs if they are exposed to it.”

While it is difficult to calculate the exact cost of cleaning up dog waste since it is part of the general cleaning responsibilities of local park and landscaping crews, the neglecting of picking up dog waste appears to only be part of a much larger problem; that being littering and illegal dumping of trash and debris.

“It is irresponsible,” said Oakley City Assistant Manager Nancy Marquez. “One irresponsible dog owner with one dog visiting the same park or trail seven days a week can produce enough feces to make it look like it never gets cleaned up. Some people just don’t seem to care much about leaving debris, waste, or litter on the ground, and it is a societal problem.”

Similar to littering, dog owners caught not properly disposing of their pet’s waste can expect to receive a fine. While pet waste ordinance laws can vary regionally, the East Bay Regional Park District fine is $50, which could potentially be increased due to additional court and processing fees. Despite this fact, as well as numerous signs in many locations in parks and on trails, residents and trail users feel that this is not enough.

“I see it all the time on the trails and sidewalks, even on my grass in the front yard,” said Antioch Resident Brian Buccellato. “People should get fined for allowing their dogs to defecate on trails and sidewalks. They should send flyers or pamphlets in the mail telling citizens about the rules and regulations of owning a dog. A lot of people let their dogs do whatever they want, and the owners forget about them.”

Frost added, “We can’t be the people complaining about the garbage all over the streets, in our waterways and in remote areas of the county, and then leaving dog waste bags behind in our parks or on the trails. It makes you the same type of person; a litterbug.”

According to Marquez, park goers and trail users can also be more proactive in helping to keep parks clean and reporting those that fail to clean up after their pets, adding that a clean and safe park or trail devoid of litter and pet waste makes for a more enjoyable experience for everyone.

“First and foremost, enjoy the trails and parks,” said Marquez. “Help keep our parks and trails clean and don’t let the irresponsible spoil the significant investment in our parks and trails. You don’t have to be an environmentalist to know that littering is bad.”

While things like increasing signage explaining rules and policies to dog owners in parks or trails, or providing more complimentary pet waste bags can assist in educating the public, at the end of the day, officials agree that it is up to the pet owners themselves to be accountable for cleaning up after their pets.

“There is NO ‘Poop Fairy’!” exclaimed Mason. “Dog owners need to clean up after their dogs. Do not leave dog waste in plastic bags along the trails; it is considered littering and against park rules. Visitors should always follow the mantra, ‘leave no trace’.”

Further information, including park and trail rules, can be found at the following link. http://www.ebparks.org/.

Specific rules about dogs on trails can be found at http://www.ebparks.org/activities/dogs/.

Agree with what Stacey Frost said above

Put up cameras with good resolution and nail those idiots who leave their dog’s feces for others to step on. Find them and fine them heavily until they get the message! I’ve seen this and when I mentioned that it would be nice if they pick up after their dog(s), I get a mouthful of expletives I cannot post here.

People dont have pride or commen sense anymore……This is a society of “leave it for the next guy to fix”. Section 8 and EBT is the root of this, people get free money and housing, so they dont know what its like to work hard for things.

Picking up my dogs poop feels disgusting, ill rather simonpure pick it up for me.

Thats because you pick it up without a bag or gloves.

That is hysterical! I’ll have to remember it! HAHAHAHAHA!

That’s my sign! I bought that online and my husband attached it to the fence at the trail on Larch Way. The poop problem is disgusting on the bike trail in that area. Sorry to say the sign has not made a difference at all!

Yip…it’s a shame. People in this country have lost all respect for others.

And its only going to get worse. Look how bad Antioch has got, this city is a magnet now for lowlife scumbags and criminals. Along with that it attracts some bad city leaders, bad teachers, bad cops, etc , who would be exposed in most cities and run out of town. And now with the new DA, This entire area, including Oakley and Brentwood will see a spike in crime. Antioch gets the spotlight of all the crime, but dont let that fool you, Oakley and Brentwood have crimes increasing too, they just try and keep it tight lipped as much as possible.

Its sad that signs have to be posted for common sense issues, just like the signs in public bathrroms that tell you to wash your hands after you wiped your azz. How is this just not common sense or knowledge?

Although I understand the frustration of dog poop, I really believe we have far greater things to discuss. We can get back to dog poop after we conquer:
-High Crime
-Poor performing Schools
-Inadequate sized Police Force
-Blight
-Trash everywhere
-Homelessness
-Addicts everywhere
-Code violations in every inch of the city
-Run down parks
-Lack of quality business/Shopping area’s
-No Traffic Enforcement
-Graffiti everywhere

Ok…I’m tired of typing, but you get the picture.

But basic respect and courtesy really is the root of alot of issues in general.

and most of our roads are in terrible shape

U r all omitting one of the biggest problems with “poop” not picked up. Among those; e. Coil infections, spread of parvo and other diseases, worms, flies that breed and spread disease. If it rains, it’s all free to soak into ground water.

Fines in other cities this size is $500 per offense. Park employees patrol the trails and cameras are up and capturing these disgusting people.

That may be true, but Antioch is broke and can’t even afford dog poop stations on these trails, let alone pay someone to empty those receptacles.

Whats the fine for the homeless guy taking a mud pie on the sidewalk near BofA?

That poor guy couldn’t help himself. Besides it’s a sanctuary state and he has rights according to Beccerra, Pelosi, and the other leftist we keep voting in. Someone was suppose to help him wipe too. California is in deep mud pies unless voters change the leadership.