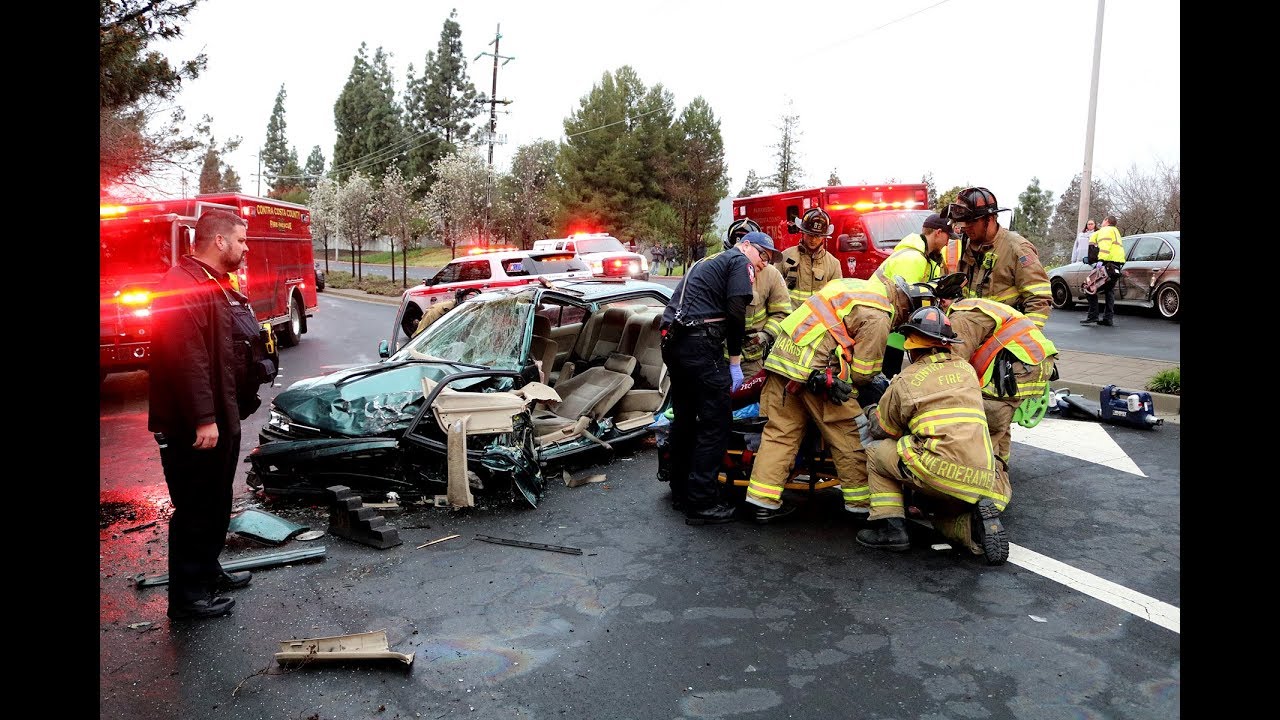 At 5:59 pm Tuesday, Contra Costa County Fire Protection District firefighters were dispatched to E. 18th Street and Hargrove for a report of a vehicle crash with rescue in the City of Antioch.

Upon arrival, AMR and firefighters located a three vehicle crash with one female patient trapped–it was estimated 8-total patients. AMR immediately requested the eastbound direction of E.18th at Hillcrest be closed to traffic.

Firefighters worked to extricate the female and within twenty-minutes she was placed in an AMR ambulance and transported to a local hospital.

In total, there were 8 patients which 4 were taken to local hospitals and another 4 sustained minor injuries or declined medical.

According to police on scene, a vehicle was traveling westbound E 18th when the female driver pulled out on Hargrove to make a left and causing the crash which sent the female over the median and into on coming traffic where she struck a van.

The roadway was shut down for a little over an hour and has since been re-opened. 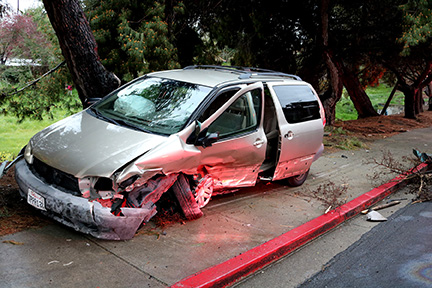 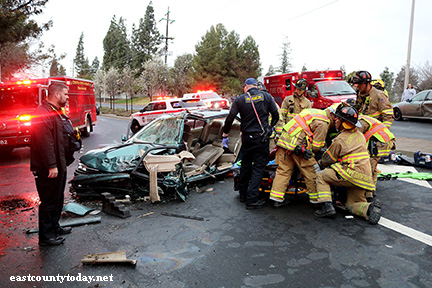 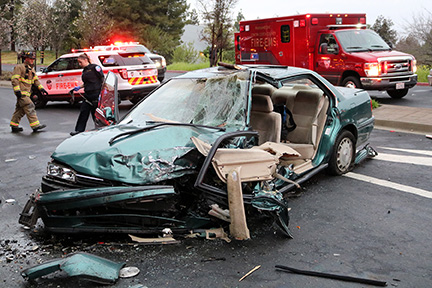 According to police on scene, a vehicle was traveling westbound E 18th when the female driver pulled out on Hargrove to make a left and causing the crash which sent the female over the median and into on coming traffic where she struck a van.

It doesn’t mean she wasn’t speeding. You know darn well most crashes when it’s raining are caused by speed.

So guilty until proven innocent. I get it.

It’s common sense, and others here seem to agree with me. I haven’t seen a crash in the rain story (on any local blog) where SPEED wasn’t a factor. If you’re not speeding and someone pulls out, you can easily slow down or stop.

Obviously with that much damage, to the vehicles. Someone was speeding, wet roads or not. Speed is a factor here folks.

Seriously slow down people AND pay attention. You can lose your life in a second. I drove by this as well as witnessed the DUI accident this weekend and also lost a pregnant friend last week to a car accident. SLOW DOWN.

I’ve seen a lot of people make totally unsafe left turns into a major street many times. They simply are not able comprehend that the right-of-way would be on East 18th Street. You should never attempt to make such a turn when you see a steady stream of traffic. You should wait until it’s clear and maybe making a right turn and then maneuvering yourself back to where you are heading. Of course, the rain is a big factor as is speed. People just don’t seem to use their brains when the weather is inclement. Pitty!

Yip…and they don’t make cars like they used to. That damage could easily been at 40 MPH. The car on the right was cut to get the injured out.

Actually the limit is 45 MPH at Hargrove.

Meanwhile there’s legislation to stop autonomous cars because in Arizona this week the FIRST person killed by one was jaywalking at night like an idiot. Meanwhile people kill people every day in human driven cars we have now and could’ve been in this story. (Sigh)

I am familiar with that intersection and I would never ever make a left turn from Hargrove onto East 18th. Way too much traffic both ways. What I do is make a right turn and then make a U-Turn at the next light IF that is permitted. I noticed that people just barge right into traffic hoping it will stop or slow down for them as they make that turn. Very dangerous, as we can see!

I happen to know the victim and just spoke to her today it wasn’t even her fault she wasn’t speeding and she wasn’t turning she was heading westbound going towards Hillcrest when a green car turned in front of her that person was turning on hard Grove not her so the erson who cut her off is to blame and she aso was in a green car which may be where the confusion comes in. She is. Not responsible for this wreck however the other car was seeding.

Was there right after it happened. (I live in apartments on corner of hargrove and 18th) if it was the female driver that this story is saying caused the whole start of this accident, then they are saying it was that green car in video (the extraction )
She was hit SUPER hard because she was stuck for awhile and it took AT LEAST 20 mins to get her out. 45 mph could have done that damage MAYBE, but nobody drives that speed at this particular intersection. Its downhill and no police EVER in this area, so speed could have been a factor. But the other car(one that hit woman in green car) wasnt damaged too much, so not sure how it caused green car to jump median and hit van going opposite way. The crash was really terrible and green car ended up at least 75 feet to the RIGHT from hargrove st .