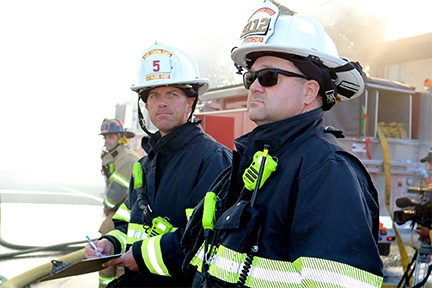 On Monday, the East Contra Costa Fire Protection District announced during their Fire Board meeting that Craig Auzenne and Ross Macumber will now become permanent battalion chiefs after testing for the position for nearly a year.

According to Fire Chief Brian Helmick, the process began in April of 2017 where 5 fire captains applied for the position with Auzenne and Macumber scoring the highest. Both then were given an opportunity to fill the roll of Battalion Chief for 6-months at a time as the second part of the District testing.

Macumber had been with the District since 2000 while Auzenne since 2001 where both promoted through the ranks.

Helmick noted that Macumber served as interim-chief for nearly a year working as an operations chief and on a special assignment has filled gaps left and right.

“I think the thing that stands out most in the time that he has been with us is what you have seen with our public outreach and our public education,” said Helmick.  “Chief Macumber has been at the helm and deserves a lot of praise for doing so.” 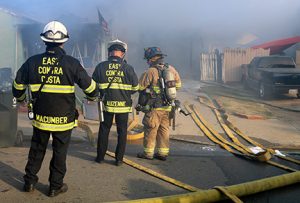 Helmick explained that when Macumber and Auzenne came in and began serving as operations chief in the middle of the season which are typically reserved for senior staff but noted the work he did.

“When they took over these positions, we did not take a step backwards,” said Helmick. “I think that is a huge testament to who they are professionally and personally. They care about their members and they want to serve the organization. Bringing these two gentlemen on in these positions I believe has been a seamless transition.”

Helmick noted that although the two promotions were needed, the District is still very far away from where they need to be administratively.

Director Joe Young called this a real “milestone” for the District because they now have the District administration back to where it was prior to the 2008 housing crisis crash.

“I really appreciate that we have crossed that milestone and think that it foreshadows good things to come from here,” said Young.

“It may seem to some people that we look a little heavy on administrative versus firefighter, but there is a very important reason that is being done. The District, especially the chief, is now free to devote more time to outreach, personal outreach, legislative outreach to work with various stakeholders within the District,” said Smith. “Having watched the impact of so much trying to be done by a 2-person staff and it was always the choke point in getting things done. Even with 60-70 hour weeks it was so much to get done. This frees up the senior leadership of the department to do a lot of the work that is needed to be done to get the type of support we need from Sacramento and do a better job to get the kinda of support we need from our local voters.”

Board President Brian Oftendal thanked Auzenne and Macumber for their service and congratulated them on their promotions.