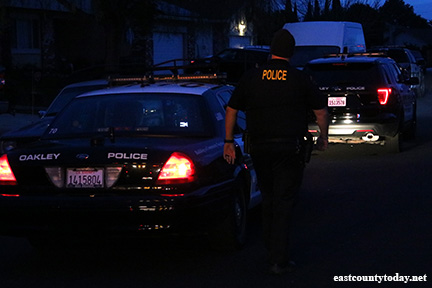 On Tuesday, the Oakley City Council unanimously approved an Alarm Ordinance Modification which they hope will cut down on the amount of false alarms police officers respond to.

Under the ordinance, residents and businesses who have excessive false alarms will first get a letter of notification seeking a corrective action, followed by a fine for each offense if false alarms continue.  The fines include:

The move comes after Oakley Police Chief Eric Christensen reported that 94-98% of police alarm calls are false and in 2019 officers responded to a total of 2,129 alarm calls. 99% of those calls resulted in no police action.

Graphic by City of Oakley

Christensen pointed out Tuesday that 91% of Oakley locations with alarms are deemed good working alarms, but 9% are a problem. In fact, of the 2,129 alarms last year, only 5 resulted in a crime-in-progress.

“Last year, our biggest offender had 221 alarms from that one location, that same address for the first part of this year has done 170 false alarms,” said Chief Christensen. “So it is a significant problem for us. We love alarms but there is a small amount of people abusing the system and causing us to eat up a lot of our time.”

Christensen told the council that they have already put two addresses on the “suspension list” where police will not respond to an alarm call unless they fix their alarms.

Councilman Randy Pope asked about the dispatch process, for example, where he works the alarm company must make two attempts to contact someone before the police are dispatched. Christensen said their dispatch (Sheriff’s office) does not screen the calls and simply take the call and send it out for an officer to respond.

Pope asked about the process where at what point does an alarm go into the “non-response”?

Christensen explained it was at the determination of the Chief of the Police that this was a continual problem associated with this alarm.

“My hope was that by sending people letters out here to say, by the way put your alarm system in a functional order because your 2018 numbers were really terrible,” said Christensen. “We sent out letters to about 85-86 people to tell them their alarm systems were non-functional. The purpose was to give them a warning and start holding your feet accountable.”

Christensen admitted many people fixed their alarms and the responses are down. This first quarter in 2019, I’ve only had to send two letters.  He said they will continue to send out letters.

Pope asked how someone would be placed on the non-response list.

Christensen said it would be based on what they have done or haven’t done to address the problem with their false alarms.

“One of the two, last year they had 55-false alarms, this year they have had 16 even after they have gotten a letter, they haven’t fixed it, you’re out,” said Christensen.

Pope asked for clarification on how they came up with 3-false alarms. Christensen explained it was standard among police departments, but even looking locally, 91% of residents are within 3-false alarms each year. 91% of Oakley meet this standard and would never receive a letter and are not deemed a problem in terms of false alarms.

According to Christensen, there is an appeal process built into the City of Oakley and if someone is sent an invoice, it will include call logs, dispatch notes and someone could always appeal to the city.

It was estimated that with six alarms going off each day in Oakley at 15-minutes each response, two-hours of officers time was spent responding to alarms which put officers out of service.

The council approved the item in a 5-0 vote.

The city are a bunch of parasites, and these cops are nothing more than glorified tax collectors.

So, instead of patrolling to keep the influx of crime out of Oakley, you are ok with them wasting time on false home alarms? People should fix the issue with the alarm system and voila! No false alarms. And 3 false alarms is plenty to figure out the cause/issue creating them. 221 visits to one location in 2018 alone?! Come on, you have to figure that YOU as a taxpayer are paying for the officers to have to waste time on these false alarms…

They are already paying $88, wow with the extra $12 they are sure going to make a difference now be realistic.

So, why are you complaining if it is only 12 more bucks?

You might want to look around. Oakley is the only city in a 40 mile radius that doesn’t have a street corner drug dealing and prostitution. The murder rate is far lower than anywhere else. The violent crime rate was also far lower. You better thank your lucky stars you have a police department that is on top of things.

Are you for real? You might need to get a life.

Hahah funny, because last time I checked on come on here once a day for approximately 10-15 minutes. But what do I do the rest of the 23 hours and 45 minutes doesn’t matter right. I’m as real as they come.

Keep your cape clean captain, might be useful one day…

Another solution to unnecessary police response aka false alarms. The City stay out of the business of private security. Police response to calls from private monitoring firms is not mandated, but is voluntary. It is part of the silent collusion of many decades ago… city respond on-demand to our customer alarm sites, and we will provide a source of revenue (permit fees/fines). It is not the citizen alarm site calling for help, it is the private monitoring firm, paid by the alarm site to filter the true/false signals. A trend is developing to fine the private monitoring firm, not the citizen site… the problem goes away. Without the cops “they” would have to provide private guard response, or filter the signals.
Source: Lee Jones; Support Services Group