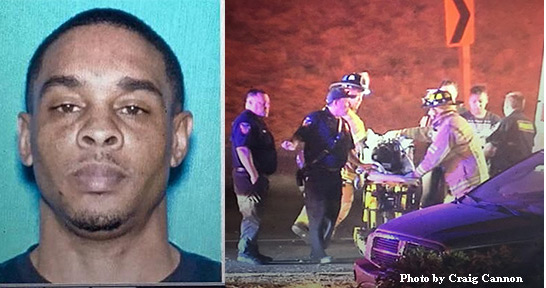 A Contra Costa County jury today in Martinez convicted Lemuel Sirvonn Wilson Jr. (36), a DUI driver, of MURDER. He fled the scene of a fatal crash on June 30, 2017, leaving two children dead and injured two others.

The incident occurred at HWY-4 westbound at the Solano Way off-ramp by the Kinders restaurant. The front end of the Infiniti slammed into the left rear of the Durango. The collision was so severe the Durango was pushed sideways down to the edge of the on-ramp and the Infiniti was catapulted over the dividing fence and into the parking lot of Kinders where it came to rest just feet from the front door. 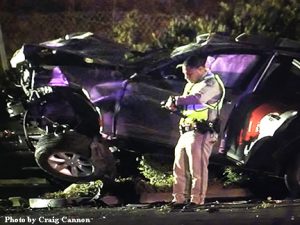 photo credit: Craig Cannon – for use only on eastcountytoday.net

Witnesses on scene said Wilson fled on foot across the highway and ran towards the Solano drive-in movie theater located at Arnold Industrial Place.

Wilson was found GUILTY of the following charges:

I’m glad this coward was caught. Serve your time and burn in hell.

Cons don’t like people who kill children. This piece of dung might really get his just reward!

Me too. Poor Mom was on her way home from the drive-in with her kids. Can’t even go out any more. Multiple offender. Makes me ill and the far reaching defense his attorney presented. Hope he gets a long sentence like LWOP for at least 25.