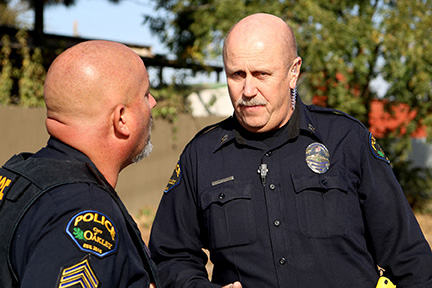 According to sources, the City of Oakley has began its search for a new police chief as Chief Eric Christensen will no longer be with the department.

While it is unclear if this was a “retirement” or if he was “let go” and what the timeline is for the remainder of his employment, multiple sources say an argument within the city managers office led to the change–which could have led to a mutual separation.

It is unclear just what has led to the sudden change in command, however, it appears the city will try and sell this as a retirement when that was not the case due to antics in the City Managers Office.

In 2018, Christensen replaced Chief Chris Thorsen who retired after 32-years of service. For Christensen, he spent 27-years with the Contra Costa County Sheriffs Office before being hired as police chief for the City of Oakley.

It is anticipated that the City of Oakley will release more information later this week.

Update:
Shortly after posting this story, the City of Oakley announced the following in a press release:

Oakley Police Chief Eric Christensen is retiring as of June 30th after nearly 30 years of  dedicated law enforcement service. Christensen’s enthusiasm, energy, passion for public  service, and community approach to law enforcement will be greatly missed as he enters his  well‐deserved retirement.

Christensen has said that he dreamed of being a police officer since he was in fifth grade  when his teacher, Sam Swafford, was a reserve officer with the Fremont Police. Christensen  said Swafford became his idol and he knew he wanted a future in law enforcement.

After graduating high school, Christensen joined the Army and became a military police  officer. He later earned a degree in Criminal Justice and was first hired as a police officer  with the Contra Costa Sheriff’s Office in 1991.

Before coming to OPD most recently, Christensen previously worked as part of the Sheriff’s  Office when police services were contracted. Christensen joined the OPD as a Captain in  2018 and was named Chief later that same year after previous Chief Chris Thorsen retired.   Immediately prior to coming back to Oakley, Christensen was Chief of Police in Lafayette.    Under Christensen’s guidance, the Oakley Police Department shot up the ranks of “Safest  Cities in California,” mostly recently breaking into the top 20 as 16th Safest City out of more  than 200 cities( and ahead of all other East County areas)  as determined by  Safewise, an  independent security solutions review organization.

Mayor Kevin Romick added, “Chief Christensen’s community outreach efforts are to be  commended, adding a new and very positive element to our community‐oriented policing  activities.”    The Oakley community will miss Christensen – not only for his success in keeping the City  safe, but for his personality, warmth, and exuberance for his job.

“Chief  Christensen  will  be  remembered  fondly  for  his  intensity  and  passion  for  the  profession.  He put in many long hours to serve us as Oakley residents and provided great  strength to the operational policies and processes of the Department,” said City Manager  Bryan Montgomery. “Eric has been a tremendous asset to Oakley and was always seeking  ways to better serve the citizens of the City.”

“I am very appreciative for the opportunity to serve as Oakley’s Police Chief.  It has truly  been an honor to do so,” said Christensen.  “Over the past few years, I have done my best to  help move the Department forward. Itʹs now time to hand the football off to another player  to keep it moving forward. During the last few months of this health care crisis, weʹve all  spent a little more time thinking about what is important to each of us. While it has stressed  our interactions with each other, it has hopefully strengthened our bonds at home.”

Christensen says he’ll miss his work and colleagues, but knows the residents of Oakley will  be in good hands with OPD.

“The dedication, bravery, and hard work of the men and  women who serve in the Oakley Police Department can’t be topped. The citizens of Oakley  deserve nothing but the best, and I tried to give them that every day and I truly believe they  will continue to get the best from this department going forward.”