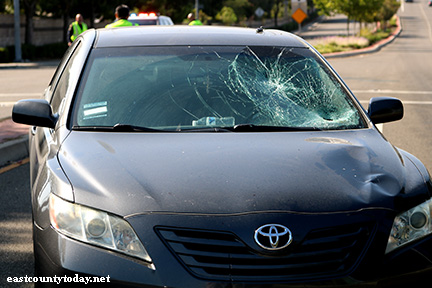 At 9:47 am Wednesday, East Contra Costa Fire and Oakley Police responded to a report of a female down on the ground after being struck by a vehicle at Empire Avenue and Gateway Drive in the City of Oakley. 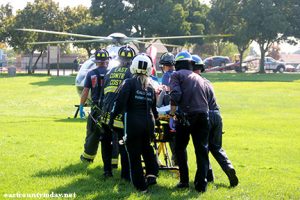 53 arrived on scene and located the patient. After assessing the injuries, a medical helicopter was requested and landed at Crockett Park, directly adjacent to the crash.

According to preliminary information, the female was struck by a vehicle going approximately 30-mph who was apparently cut off by another vehicle causing the driver to swerve into the median where the female was standing.

The vehicle, which was traveling in the northbound direction then hopped the median and ended up in the southbound lanes.

Firefighters and AMR worked to asses the patient for her injuries and then she was transported by AMR to the helicopter spot where she was then airlifted by CALSTAR to a local hospital.

No further information was available as Oakley Police were on scene investigating the incident with at least one lane in each direction of Empire Ave closed.