The following statement was put out by the Brentwood Police Officers Association over the weekend regarding Brentwood Measure L in an effort to educate undecided voters.

If approved, Measure L would annex 815 acres and with 555 acres for 2,400 homes which 80% is for senior housing, 225 acres would be permanently designated open space and could include agriculture and associated facilities. It is also expected to bring in $200 million in one-time building permit revenue, along with annual property tax and sales tax revenues. It will also provide road improvements on Balfour Road and American Avenue while providing the East Contra Costa Fire Protection District with $11 million.

Here is the statement: 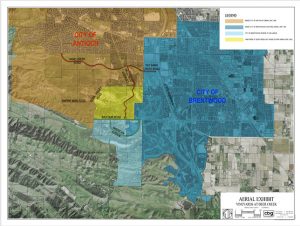 Based on comments made regarding our endorsement of Measure L, it appears there are some basic misunderstandings on these concepts as they pertain to the measure.

The first misunderstanding is the premise that, “if Brentwood voters don’t vote to expand the ULL, then the land encompassed by Measure L can never be developed”. This is patently false. Brentwood can only control what is INSIDE our ULL. We have no control over lands we decide not to include in our ULL, so there is nothing our voters can do to prevent Antioch from annexing that land (other than us deciding to annex it first). We can’t say, “We don’t want it, and you can’t have it either.”

The second misunderstanding is the premise that Antioch voters have somehow already decided they don’t want that land or any other expansion of their ULL. That is not what Antioch voters have stated. The “Let Antioch Voters Decide” initiative only protects land WEST of Deer Valley. Does anyone think it is a coincidence that the land their initiative protected borders existing Antioch neighborhoods and developments? Who do you think led the charge on that initiative?

There is also an initiative in Antioch to ensure any expansion of their ULL requires voter approval. That is the same thing we have here in Brentwood. Requiring voter approval is nowhere near the same thing as not being able to expand the ULL (otherwise Measure L wouldn’t even be a thing here). An area like the one we are talking about could bring Antioch some much needed development money, and Antioch residents know that. Now ask yourself, are there are any existing Antioch residents near the Measure L area who will put up a passionate fight against development in that area? The answer is no. Antioch could easily annex that area without risking the anger of any current residents. It is a much easier sell to them than development west of Deer Valley was.

None of us have a crystal ball. But we can either pass Measure L and guarantee control over an area directly next to our community, or we can “cross our fingers” that Antioch never decides they want it. The latter approach is not the best way to handle public safety interests.

As someone in favor of Measure L I think the most important factor is this – If we don’t use, we lose it.

As Officer Huesman states, if Brentwood turns this measure down then essentially the residents of Brentwood should be prepared to sit back and wait to see what Antioch does with the property.
Better to have a seat at the table (or own the whole table) than to be sitting outside watching whatever occurs.

Passing Measure L reaps so many benefits for Brentwood. Why would anyone let those go? Just improving Balfour and Deer Valley Roads is reason enough to vote YES on Measure L, especially if you use those roads to drive to Kaiser. No matter what the NO crowd says, that beautiful land will be developed, if not now it will be within a few years. You can’t stop growth. And with growth, you’re going to have traffic. Summerset and Trilogy residents should be thankful to BN Partners for initiating the great communities they live in and what these senior communities have done for Brentwood. BN Partners have passed the test. I give them a A+ for wise planning and future thinking. Think of all the Brentwood benefits you’re giving away if you vote “no.” I’ve already votes YES.

Measure L does not widen Balfour or Deer Valley to more lanes into city limits. The existing roads that are within city limits WILL NOT BE WIDENED FIXED OR UPDATED.
The only part of the road that will be fixed or re-done is from the balfour/deer valley intersection to the city limits.
As a homeowner that lives out past chadbourne, I already sit in traffic on balfour, due to the high school, other homes, and un-synced signal lights. This measure will gridlock both balfour and deer valley with a potential 4000+ vehicles.

Why can’t the ULL be expanded, and ALL space be protected from development? That way Antioch can’t build housing that clogs Brentwood streets, and greedy developers can’t add housing without enough supportive infrastructure?

Any mention of added police officers to service all the new people that come here regularly? I didn’t think so, wait and see what this does to us in 5 years. Infrastructure is key, I rather have extra cops than a wider road…..

So as the POA president, I’m sure you can see how this will hurt comradery and morale? No????

Or, our dear City leaders could have seen fit to give us a choice to move the ULL, but NOT do all the B.S. that GBN is proposing – instead sticking with our current plan for that area. As “Just me” mentioned.

Public servants and their unions should stay out of politics.

It always will make them look bad because there are two sides to every story. Think about it.