During Tuesday nights Oakley City Council Meeting, Vice Mayor Doug Hardcastle and Randy Pope attempted to stop a proclamation from being read and instead postpone it until a formal policy could be created.

After a discussion and a failed motion to table the item, Mayor Alaura read the proclamation.

The move to table the item came as Mayor Claire Alaura was set to read a proclamation recognizing LGBT Pride Month. Proclamations in the City of Oakley have always been issued by the Mayor.

Attorney Derek Cole explained that there was some dissension among one or more members of the city council regarding the proclamation.

Cole stated that the City of Oakley does not have a written out policy for proclamations, but rather they have a practice that has been followed for several years where the Mayor selects the proclamations since they are the head of the city—which each councilmember gets a chance to be mayor since its rotational.

Cole noted that to date, they had not had any dissension to any proclamation.

“My recommendation to the council is that the mayor give the proclamation as scheduled because that is as Mayor, she is entitled to do under our established practice,” said Cole. “Prior to the Proclamation being read if there is any councilmember that wishes to speak on the item that you do so.”

Councilmember Randy Pope made an immediate motion to table the proclamation until they establish a policy.

“Proclamations traditionally have been non-controversial, non-divisive that the whole council supports, their kind of happy things, a good thing we can do and in the case where the whole council cant support it or be opposed to it, I think we need to have a policy in place for those situations,” stated Pope.

“Most of the time our proclamations honor the Boy Scouts, the Girl Scouts, committees in the City that help, the Lions Club, Kiwanis Club, things like that,” explained Hardcastle. “When you bring someone’s preference to have {pause}, use sex as part of their proclamation, I don’t think that is where the city should be stepping in and getting involved in with what goes on behind closed doors.”

Hardcastle continued by saying he realized other cities and counties are doing this, but believed Oakley had a different vision.

“Part of the proclamation that says we can all live and work together with a commitment with mutual respect and understanding, I think that goes for everybody. I don’t think that should have to do with anybody’s sexual preference or anything like that. It is just a human thing that we respect,” stated Hardcastle. “We have You Me We = Oakley here that calls that out for people of different ethnicity’s, different sexual persuasions and stuff like that, so I think we covered that, so I don’t think there is a problem in Oakley with the LGBT community. This calls for a month of gay pride month, I mean we only honored the veterans for one day out of the month. We have Memorial Day set aside for one day out of the month and to honor a lifestyle for a whole month, I think that is going above and beyond what we represent here in the city.”

Hardcastle then suggested that everyone just treat each other how they want to be treated.

“I wouldn’t ask for a proclamation, I’m overweight a little bit, that people do a special proclamation because we are fat people or something like that because their biased against, so I think we can just stick with the Boy Scouts and non-controversial items that we put forth,” said Hardcastle. “Again, I think everybody should be committed to mutual respect and understanding with everyone in the city.”

Councilwoman Sue Higgins stated she supported the proclamation and had no issues with it and to her it was not controversial.

At that point, Councilman Popes motion was seconded by Hardcastle and as legal was explaining the process of what could happen in the future to a proclamation policy, Mayor Aluara interrupted saying she was going to read the proclamation tonight.

“There is no rules except the rule that it is at the discretion of the mayor to read proclamations, I feel that you can’t then put a pin in it and then go back later and change the rules because we don’t like how we are playing right now,” stated Alaura. “For that reason, I have a few thoughts and I am going to read the proclamation.”

Pope stated that Oakley had a “custom” where the mayors have always been careful not to select controversial items or other members of the council would disagree with.

“Your choice to break that custom and to go against the wishes of the council, when we have a motion on the table which deserves discussion and a vote,” stated Pope. 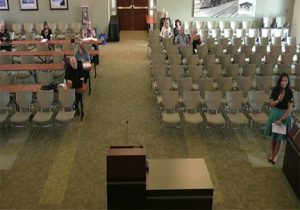 As Alaura was preparing to read the proclamation, Pope interjected saying there was a motion on the table and she was out of order and no other action should be taken until the motion is voted on.

“There is no action I am doing besides reading the proclamation,” stated Alaura.

Legal then interjected at the request of Pope saying it was correct since a motion was seconded, that they take a vote on the motion and if the motion is successful, then the expressed will of the council is to table the item. The mayor then can proceed as she sees fit.

Alaura stated that they can have discussion on any future proclamation, but as it was now, she was following all the guidelines that are already set by the city.

“I am not breaking anything by issuing a proclamation under the rules that we have currently,” said Alaura.

Legal then advised the mayor that a vote be taken on the motion and then the mayor can proceed as she sees fit once that vote was taken but a motion is on the floor and be voted.

Councilman Kevin Romick provided some history and context as the longest serving councilmember.

“Never before have we questioned the mayor’s selection of a proclamation. We haven’t always agreed, but we have never challenged that. It was never written in there that all council members have to agree with the proclamation,” stated Romick. “My issue right now is the road we are traveling on is full of detours ahead of us. If every decision, we make as a mayor in our role as mayor is going to be challenged by council members who may not agree with us, then we are never going to get anything done or move forward.”

Romick stated he did not agree with the direction that Mayor Alaura has decided on as far as proclamation but would honor the fact that she is the mayor and a procedure is in place.

He further urged the council not to change the process at this time.

The council then took a vote a vote which failed in a 2-3 vote with Hardcastle and Pope supporting tabling the item while Alaura, Higgins and Romick objected.

Before reading the proclamation, Alaura noted that of the 19-cities in Contra Costa County, Oakley remained 1 of 2 that had not recognized June as LGBT Pride Month.

“There are many proclamations that come before the council, there are ones that come in support of fighting a particular disease, such as Lupus or MS. others that recognize the work of groups, such as the Public Works Department or the Red Cross. Then there are groups in our community who would like to be recognized and bring awareness to who they are such as those who have Autism or those who are part of the LGBT community,” explained Alaura. “Although I may or may not have a direct connection to any of these groups, I do know that they live here and they call Oakley home as we all do.”

Alaura then made it clear that she alone issued this proclamation for LGBT Pride Month and welcomed those who would like to support it.

Alaura then read the proclamation