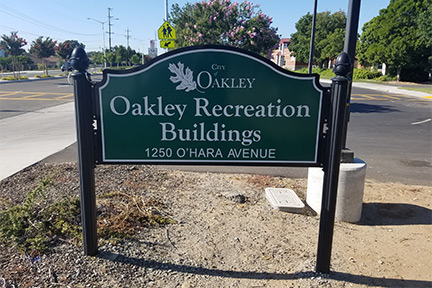 The City of Oakley is set to begin construction on a long-awaited new recreation community center near Downtown.

The project, located at 1250 O’Hara Avenue, will also include a new parking lot, sidewalks, a plaza, patio areas, landscaping, and an approximately 9,000 square feet multi-purpose building. Construction is set begin at the end of this year and is planned to be built in phases.

“We expect the construction to be complete next summer,” said City Manager Assistant Nancy Marquez. “Some prep work has taken place, however the construction of the first phase will begin at the end of this year.”

The proposed new recreation center will include a 4,152 square foot community room, a 1,239 square foot lobby, and 1,117 square foot kitchen. The proposal also includes offices, a conference room, a stage, a “green” room, along with a multi-purpose turf area, additional parking, and a new traffic signal for the planned entrance on O’Hara Avenue at the intersection with Chianti Way.

“Every community deserves a facility like this where classes, programs, community events, and banquets can be held,” said Mayor of Oakley Sue Higgins.

A significant part of the project entails the replacement of five temporary modular buildings currently used for recreation programming. The buildings were installed in 2004 as part of partnership with the Mount Diablo YMCA, with the agreement that a permanent structure would be built within five years. But the YMCA fell into bankruptcy and vacated the site in 2010. The buildings are still in use, but are aging and falling into disrepair. These buildings are the only buildings in the City of Oakley available for such activities such as after school programs, classes, and summer camps, but it is estimated that they may be usable only for the next five to seven years.

Fully developing the site and completing the project is likely to cost in upwards of $20 million for future buildings and phases, and would also take years to complete. But $8.2 million in funds have been earmarked for phase one of the project stemming from a grant, capital project reserve funds and a bond refinancing.

Funding for phase 2 of the project has not yet been identified, but construction is tentatively scheduled to begin early next year, with an estimated completion of January 2019.

Sean Tongson, writer, is a resident of East Contra Costa County, a proud husband and father, and enjoys outdoor activities such as hiking, road tripping, and traveling. An avid bay area sports fan, Sean’s favorite teams include the 49ers, Giants, Sharks, and Warriors.