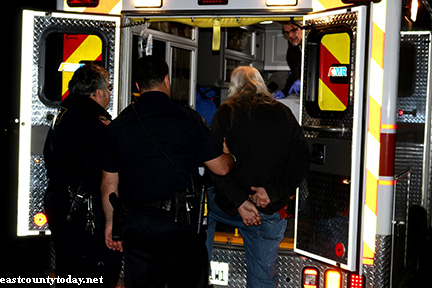 At 9:10 pm Sunday, Oakley Police responded to a report of several shots fired in the area of Second Street and Ruby in the City of Oakley.

When police arrived on scene, they located a 70-year-old man in the middle of E. Ruby Street holding a firearm. He complied with officers commands and was detained while police investigated.

According to Oakley Police, numerous gunshots were reported by neighbors both inside the home and outside and they have located several shell casings. Police located two firearms, one inside and one outside.

Police detained the man without incident who told police that he had four people who had broken into his house and that is why he was shooting.

“He believed there was a home invasion type robbery. He believed he hit all four and one was armed with a pistol and one was armed with a couple screwdrivers,” said Sgt. Solomon. “His story did not quite pan out. In the back he said they broke in the back door and when we checked the exterior of the house and looking for victims, we didn’t see any damage to the house.”

Police inspected the house and did not see any noticeable suspects or victims, however, they requested a K-9 unit from East Bay Regional Park District Police (the closest available k9 unit) to clear the house.

Nobody was located in the house said Sgt. Soleman. Police detained a 70-year-old Oakley man who was being evaluated for a 5150 (psychiatric evaluation).

No further details were released.