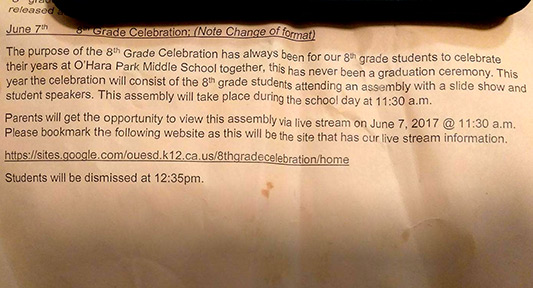 Parents of 8th graders in Oakley expressed frustrations this week by a decision of the Oakley Union Elementary School District who announced a format change to the 8th Grade promotion ceremony.

The move impacts parents and students of Delta Vista Middle School and O’Hara Park Middle School where the format was officially changed to an assembly versus a graduation.

Although the letter does not formally tell parents they cannot attend the assembly, the letter implies that parents should instead watch it live on the internet.

According to the letter:

The purpose of the 8th Grade Celebration has always been for our 8th grade students to celebrate their years at O’Hara Park Middle School together, this has never been a graduation ceremony. This year the celebration will consist of the 8th grade students attending an assembly with a slide show and student speakers. This assembly will take place during the school day at 11:30 am.

Parents will get the opportunity to view the assembly via live steam on June 7, 2017 at 11:30 am. Please bookmark the following website as this will be the site that has our live steam information

Parents expressed their frustration with the District and opposed the idea of watching it online versus being in attendance..

Meanwhile, Superintendent Greg Hetrick defended the decision saying this was a celebration for students and not a traditional graduation where each student’s name was called. He said the ceremony will last approximately 30-minutes.

“We haven’t had a graduation style in years and instead its been an assembly. We don’t read all the names, but it gets billed as a graduation. That is not what this is,” said Hetrick. “It’s a celebration at the end of 8th grade. It is important of where the students are right now, no one will argue that, but in the big scheme this is not good enough its not the end of their journey, its now important what they do after they pass 8th grade.”

Hetrick added that its one piece of their educational journey and that the focus should be on preparing students for their next steps as this was one of many graduations including working to become competitive in a global climate where the high school diploma no longer provides a guarantee to success.

“The first of many is graduating from high school. After that, study to learn a trade, go off to college, but they need to focus on making themselves competitive in a global economy,” explained Hetrick. “I don’t want this to feel like their greatest achievement they will see, we have to make sure they are prepared for high school and we will celebrate them during the school day outside in an open forum.”

Hetrick says one of the reasons for the format change was to assist the janitorial staff from having to work on mowing the grass and spending hours on set-up and take-down of chairs on a ceremony that is a half an hour.

“With the ceremony, we have to do all the maintenance on the grounds, custodians stop what they are doing and every chair is pulled from the gym and set up. 30-minutes later, everyone gathers and is gone. Now they have to put it away,” says Hetrick. “That takes hours for set-up and take down.”

Hetrick also challenged the community to look at the big picture and that just because they have always done it one way, doesn’t mean they have to always do because times change.

“We constantly have to ask ourselves, do we keep doing something because we always done it or do we begin to look at what is our purpose for doing it. From my end, should the 8th graders celebrate, absolutely, but should they be recognized for American Legion and the Soroptimists, but that is best be captured during the school day so we are not disrupting everything else to do so,” said Hetrick. “I would agree with that as well, it’s fitting to have it during the day. The bell rings and the students are going off. Parents can have an 8th grade party, we are not excluding them, and we want to have this during the school day.”

Hetrick says for those parents who wanted the keepsake of an 8th grade promotion will have access to the video. He also says they have never excluded parents and they can still attend if they wish.

“We know some people want the keepsake and it will be live steamed and recorded and played again,” explained Hetrick. “The biggest misconception that comes up, this is not an every kid gets up and shakes hands, this hasn’t happened in 8 or 9 years. Its an 8th grade assembly that highlights the promotion.  It recognizes only some students.”

Hetrick explained that during the ceremony, they have the class present speak to their classmates and the class present from last year tell them what to expect at Freedom. There are a couple of awards handed out and then it’s over.