At 11:11 am Sunday, East Contra Costa Fire Protection District firefighters responded to a report of a column of black smoking coming from a home on in the 500 block 4th Street in the City of Oakley. 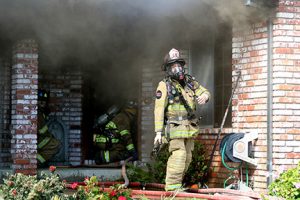 Upon arrival, Engine 53 arrived on scene reporting heavy smoke and flames with the home charged with smoke. Contra Costa Fire Protection District Engine 88 was second on scene and crews began to attack the fire.

Fire crews began an interior attack through the front door when they encountered heavy smoke and flames from inside the structure. They worked to gain access before knocking down the fire by about 11:50 am.

The home was a total loss and the cause of the fire is possibly discarded cigarettes according to the resident. There were no injuries reported.