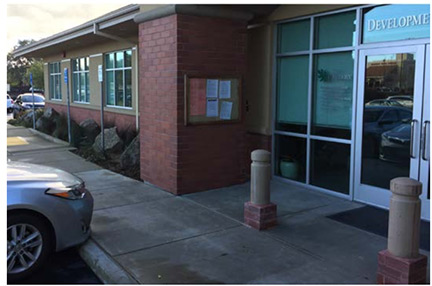 The City of Oakley Safety Committee and Police Chief Chris Thorsen recently assessed the security at and around City Hall and the Police Department to determine if more could be done to protect employees and citizens.

Chief Thorsen said, “In today’s environment we felt it was important to attempt to lower the security risks and ensure our employees are kept as safe as possible around City Hall and at the Police Department building.”

Safety barriers include large natural boulders installed around the most vulnerable exterior sides of the buildings. They blend in with the landscape and are aesthetically pleasing and prevent vehicles from crashing into the buildings.

Additionally, bollards were installed at the entry doors of the Development Services Department and Police Department.

According to Nancy Marquez, the bollards used were left over from a past project and the installation costs around $4,000. Meanwhile, camera’s had already been previously installed and wanted to remind the public they were there.

Mayor Sue Higgins said, “I’m pleased we have proactively tightened up our security. If it can prevent or possibly be a deterrent to any attack on an employee or citizen, then we will have met our objective.