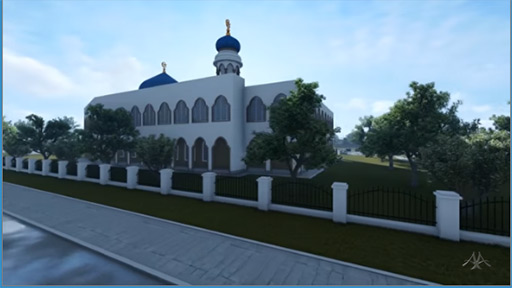 The project was first reported by this publication back in September of 2017. The project is defined as a 14-acre lot and is planned as a multi-use facility, which will consist of a senior housing facility (200-units), a temporary shelter, a full-time private school, an event hall, and a mosque that is to be constructed over several years.

According to Ibn Sina Community Center website, they are currently trying to secure the land for the project –$1.2 million. They have already agreed to purchase for the land for $1.2 million subject to plan approval by the City of Oakley. They currently have an open escrow with a paid deposit of $60,000.

If the city approves the plan, they will pay off the property and begin implementing the first building of the master plan, which is to build a 10,000 SF School building with an estimated budget of $2,300,000.

According to the City, as of Tuesday, the project has not yet been approved and that the application submitted months ago was deemed incomplete and requested the applicant to re-submit for review. The city said the package has not yet been received.

The city then provided the application process any project proposal would be subject to. The following was posted via Oakley social media sites:

Via City of Oakley:

We have been made aware of some misinformation regarding the proposed IBN Sina Mosque and Community Center in Oakley. This project has not been approved. A prerequisite to the project being evaluated by the City Council in a public forum, requires that the City receive a complete application and that the City then conduct an environmental impact analysis.

The applicants for the proposed IBN Sina project made an initial application to the City several months ago. That application was deemed incomplete and the applicants were required to complete a number of other studies and impact analyses to be resubmitted and reviewed. That resubmitted application package has not yet been received. If received, it will follow the same review process as would any other development application.

Consideration of this and any other proposed project will always take place at a publicly-noticed City Council Meeting. As with all projects, properties within 500’ of the proposed development will be provided a mailed notice of the public hearing, a public hearing sign will be placed on the property giving notice of the public hearing to the public, and the volunteer Citizen Planning Advisors will also get to review the application. Further, all of the development applications can be found on the City’s website for public review and comment. Visit http://bit.ly/2E1x58i to see a summary of the development application process.

A key component of the development review process is fairly applying the same criteria and placing the same requirements on all proposed developments. Each application is fully vetted using local, state and federal laws and regulations and each application is provided the fair, due process of review. The aforementioned laws do not allow the review process to consider the race, ethnicity, gender, religion, or sexual preference of the applicants, or any other arbitrary criteria.

Very specific to the development of religious facilities, the federal Religious Land Use (RLUIPA) protects individuals, houses of worship, and other religious institutions from discrimination in zoning and related land use actions. RLUIPA strictly prohibits cities from taking any actions that:

A website about the project can be found here.

Yellow Roof Foundation Could Get Land in Oakley...

Female Arrested for Arson in Oakley After Garage...

This is why we need Trump. They are trying to take over the world little by little . They are already over populating on purpose. The birth rate is 7 for muslim and below 3 for other races. We will be taken over from the inside out .We need to stop while we are ahead.

Side note – each muslim man has 3 or 4 wives and has 3 kids with each wife. that is their goal to over populate until they eliminate all other races and religion.

Wherever muslims build a mosque, that is considered conquered land. Read the Qu’ran! Stop these people whose goal is to take over western civilization. Their Islamic philosophy is diametrically opposed to our western one. They hide behind what they call a “religion” .. which is actually a militant mind set.

The war finally is coming on to our soil, little by little…

Sorry folks, like it or not, our constitution allows freedom of religion, not just yours or mine, but

Ok Fedup2here , so let the muslims take over and see how much freedom they will give you. You are stupid if you believe that they have the right to take away American towns little by little . Why wont you just move to Dearborn, Michigan. Check out this link https://www.snopes.com/photos/signs/islamicagenda.asp and do your research . The only people who benefit from muslims are the men who rape other men and women in the name of their god . People like you make me so mad because you support freedom yet you support one of the most repressive religions . You need help .

Redup2here — Islam is a political system that tries to pass for a religion and holds Sharia as its constitution. It’s known as a theocracy or a dictatorship by the will of Allah, who in the case of Islam demands death to apostates, tax on the unbelievers (infidels), subjugation of women, repression of freedom of opinion and expression/speech, among many other things that are incompatible with our way of life in the US. So as a “liberal” I am curious why are you so anxious to let the proponents of this political entity control the rest of us.

Muslims are forbidden to assimilate into the culture they so desperately want to undo. They have been trying to expand into western areas since their inception, but were always stopped! They count on the fact that most westerners are not aware of the goals muslims espouse and that is very sad.

Sorry I put the incorrect link but check this out https://www.youtube.com/watch?v=CrA_9SoCitk

Thanks for the link! I sent it to just about everyone I know. We must fight this pestilence with everything we’ve got! I’ve watched them act out in city council meetings (other jurisdictions) and they yell and threaten the members. However, I can outyell any of them!

People shouldn’t be complaining about this new facility being built. Nobody blinks when a new Christian-based church opens up in the area. What about the new church being build across from WinCo? No complaints. C’mon guys, it’s a place of religion. Everybody has the right to practice what they please. Grow up and take it easy.

To the people posting hateful and negative comments about this project: please grow up and open your eyes. It’s just another place to practice religion…it’s almost like a church. Nobody complains about those. The last time I checked, this is a country other religious freedom. I think this is wonderful news. It’s about time we embrace and celebrate other religious and culture instead of putting them down.

The difference between a Christian church and a muslim supercenter is muslims do try to take over the area that they have presence in . Look at Europe , look at Michigan . Its not about religion it is about a political threat to wipe out all non muslims. I bet you are muslim yourself or dumb enough to believe the propaganda that the media says that its a “peaceful religion ” . BS ! Look at the middle east ? Has their ever been peace ? Or in Iraq or Iran ???? Where there is muslims that control the majority it is complete chaos . I also dont see any Catholics doing suicide bombings or a Christian hijacking planes. Just saying the GOD honest truth.

I was born and raised in the Bay Area, my parents are immigrants from Asia. I grew up Catholic and went to Catholic school. We can say the same thing about Christian-based religion as well. Historically, Christianity and Catholicism was a tool to take over and colonize many other countries. What’s wrong with opening another place of worship? I don’t see the harm.

It’s almost like a church, but it’s not a church. I’m almost an astronaut, but I’m not an astronaut. Get the difference?