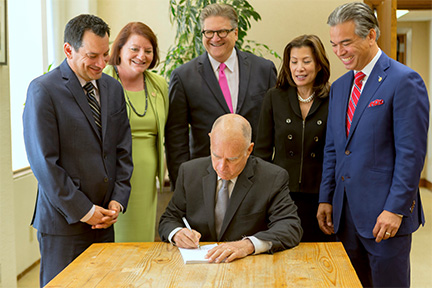 On Wednesday, California Secretary of State Alex Padilla announced that a referendum has qualified for the November 3, 2020, General Election Ballot.

The referendum is set to challenge Senate Bill 10, the California Money Bail Reform Act, which aimed to preserve the rights of the accused, while prioritizing public safety. The bill was authored by Senator Robert Hertzberg (D-Los Angeles) and Assemblymember Rob Bonta (D-Alameda)

The new law – which would take effect on October 1, 2019 – establishes a new system for determining a defendant’s custody status while they await trial based on an assessment of risk to public safety and probability of missing a court date rather than their ability to pay cash bail. Voters will now determine if the Bill will stay or revert to the old bail system.

According to Padilla, in order to qualify for the ballot, the referendum needed 365,880 valid petition signatures, which is equal to five percent of the total votes cast for governor in the November 2014 General Election.

The Attorney General’s official title and summary of the referendum is as follows:

REFERENDUM TO OVERTURN A 2018 LAW THAT REPLACED MONEY BAIL SYSTEM WITH A SYSTEM BASED ON PUBLIC SAFETY RISK. If this petition is signed by the required number of registered voters and timely filed, a referendum will be placed on the next statewide ballot requiring a majority of voters to approve a 2018 state law before it can take effect. The 2018 law replaces the money bail system with a system for pretrial release from jail based on a determination of public safety or flight risk, and limits pretrial detention for most misdemeanors. (18-0009)

Bonta: Bill Would Allow Candidates to Use Campaign Funds for Child Care Expenses

The politicians that decided voter harvesting was acceptable (thanks in part to the unions) is the reason why this will go the way the politicians want it to go, regardless of your vote. We reap what we sow.