Bonta: Bill Would Allow Candidates to Use Campaign Funds for Child Care Expenses 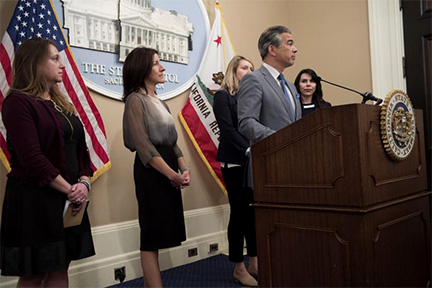 SACRAMENTO – Assemblymember Rob Bonta (D-Oakland) has introduced AB 220 which would amend the Political Reform Act of 1974 to expressly allow campaign funds to be used for child care by those who choose to run for elected offices in California.

“AB 220 will help create greater gender parity among elected officials in California and more broadly help all parents with young children who seek or serve in public office by allowing the use of campaign funds for child care expenses,” said Bonta. “The California State Legislature is currently 30 percent female. That is a marked change from just a few months ago when the legislature was only 23 percent female. Yet, there is more work to be done to bring about true parity that reflects the people of California.”

Currently, there is no statute in California or official ruling by the California Fair Political Practices Commission allowing candidates to use campaign funds for child care purposes. That means any person who attempts to use campaign funds for child care expenses has no statutory protection and would be relying on a 20-year-old, non-binding advice letter by the FPPC which does not carry the weight of law. AB 220 would provide certainty by removing this barrier for parents of young children seeking office by placing this allowance in statute.

“I was a single mom when I first ran for office. I know the struggle of balancing a household budget on a limited income, and I’m also very aware of the financial and time constraints with running for office. California needs to do everything it can to empower more parents of young children, especially women, to run for office and that’s what this bill does,” said Assemblywoman Gonzalez (D-San Diego), joint author of AB 220. “We will not see gender equality in elected office until this campaign finance law is modernized.”

Last year, the Federal Election Commission took action to allow campaign funds to be used for child care expenses for seekers of federal offices. But the vast majority of candidates in California are seeking local or state offices. Therefore, this federal decision does not apply.

“AB 220 is a simple yet powerful change in state election law which can make our office holders more reflective of the electorate,” said Bonta. “Parents of young children bring an important perspective to policy-making and should be encouraged to enter the political arena and serve. Our campaign laws should support candidates with young children and reflect our California values of inclusion, equity and opportunity.”

“The simple truth is that women are underrepresented at every level of government – from city councils to State Assembly to Congress. Like many elected women, I’m passionate about closing that gap. This bill removes a critical barrier and help more women run for office and enter public service,” said Assemblywoman Cottie Petrie-Norris.

“Just last year, we celebrated the 100 year anniversary of the first woman being elected to the California Legislature. Over the course of these one hundred years, 165 women have been elected compared to thousands of men over the years,” said Assemblywoman Rubio (D- Baldwin Park). “It is clear strong barriers exist to women getting elected in California, and I am proud to support Assemblymember Bonta’s legislation to help create equity in our system and encourage more women to seek public office.”

“We’re allowed to pay for drivers, schedulers, and other support yet covering the necessary cost of caring for our children is excluded. Giving women and families the support they need to run for office is far overdue,” said Senator Nancy Skinner (D-Berkeley).

Assemblymember Rob Bonta represents the 18th Assembly District, which includes the cities of Oakland, Alameda, and San Leandro and is the Assistant Majority Leader.