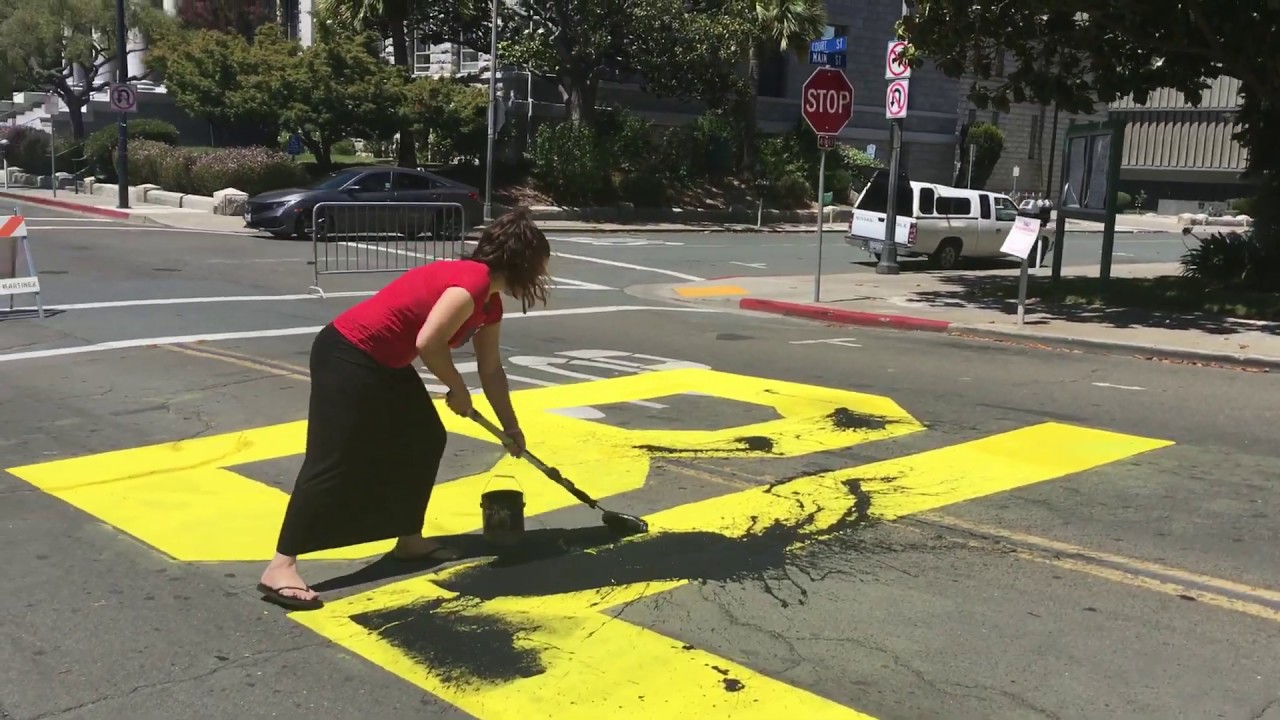 The Martinez Police Department is investigating the vandalism of a Black Lives Matter Mural in downtown Martinez.

According to police, community members obtained a permit from the City to paint Black Lives Matter on Court Street in downtown Martinez. Once the mural was completed,an unidentified white male and white female arrived. While the male made comments to a group of onlookers his companion began painting over the mural with black paint.

At one point she made a statement that this was not, “…happening in my town.” She also asked the male to get her another can of paint to continue with the act of vandalism.

It appeared that the couple came to the mural with cans of paint and a roller with the specific purpose of vandalizing over the mural. The community spent a considerable amount of time painting this mural only to have the suspects destroy it by dumping and rolling paint over part of the message.

The incident was captured on video and posted:

According to police, they were notified and by the time we arrived the suspects were gone. A witness provided a photograph of the suspect’s vehicle which was described as a Nissan pickup truck with the word “NICOLE” on the right side of the tailgate in silver lettering.

The truck has a camper shell and the license plate is 52701B1.

The case is currently under investigation and if any members of the public can identify the male and female involved in this incident please call our Dispatch Center at 925-372-3440 with the information. The community spent a considerable amount of time putting the mural together only to have it painted over in a hateful and senseless manner.

Police said the City of Martinez values tolerance and the damage to the mural was divisive and hurtful. Police are asking for the publics help to identify those that are responsible for this crime, so they can be held accountable for their actions.

This is why meth and incest is illegal.
I wonder if their parents had any children that lived?

That is so incredibly rude… Wait sorry mixed up the meaning of rude and true.

That is so incredibly true. I don’t understand these Trumpers so triggered by the BLM movement. Much better than the yee haw confederate flag lovers.

That mural was vandalism in the first place!

TOTALLY AGREE!! NO BLM SHIT ON PUBLIC STREETS THAT WE PAY FOR!

The original mural was permitted and legal, you ignorant fool.

I don’t give a rat’s ass if it was “permitted” . . it’s still VANDALISM

Did you read the article? They had a permit, totally legal… it should be illegal to comment If you haven’t read what are commenting on… it’s 2020… trust this wouldn’t have been done with out the proper paperwork to do so

The City of Martinez had NO RIGHT to give these morons any kind of PERMIT to vandalize our streets! People here are really pissed off. Pissed off big time!

We have the right to paint over this crap!! TIME TO FIGHT BACK! Trump 2020, look I used a comma assholes!! People trying to take away our freedom.

You are not free to mistreat anyone.. why do you confuse trying to secure our freedom with trying to take yours?

Nice try, Jamie. You used a comma. Too bad you didn’t use it properly. Better go back to Ms. Smith’s 2nd grade refresher class

So they claimed the city’s mural was “vandalism“ and shouldn’t be there but then they go and vandalize it…? Makes sense. I really hope they are hit with a hefty fine or arrested.

The people who were covering up the VANDALISM committed by the BLM jerks were actually restoring a vandalized street to what it has been and should be. They should be given recognition for their work. The City people had NO RIGHT to give permission to DEFACE our streets. They will hear about it and they won’t like what they hear!

Marlene, nothing wrong with fixing vandalism! It’s the decent thing to do. I’m going to the next City Council meeting with a bunch of friends and we will be objecting to this permit, vehemently! That street needs to be cleaned up using acid or whatever will take that idiotic “mural” out.

Regarding the Martinez vandalism! What investigation? You have the license plate, description of the car and video! Seriously! ARREST NOW!

Maggi – These people are to be commended for doing THE RIGHT THING! You have no idea where they are from or the license plate even belongs on that vehicle. They could turn themselves in and be given medals for attempting to clean up the original VANDALISM on that street. I don’t care if they were given a permit or not. The City had no right to issue one. That BLM bunch committed vandalism on OUR street.

Author of this article is a chi-com sympathizer, “The community spent a considerable amount of time putting the mural together only to have it painted over in a hateful and senseless manner.”, is a statement made towards a company that wants to contribute to eliminating our law and order, independent and healthy nuclear families, and eliminating constitutional freedoms. This is the true hatred and senseless manner because all lives do matter as children of God.
BLM funnels money to politicians that will support global slavery and that is why BLM is not welcomed on our streets.

This was from Martinez Police Mr. Doe

Absolutely! Since when do we go around giving out license plates of people? If Black Lives Matter then city of Martinez do something to help the black lives and stop pandering to these true domestic terrorists.
I hope for your sake East County today that nobody has them down and does something to them because you gave their license plate out.

Vandals who enthusiastically violate the law in front of cameras do not have a reasonable expectation of privacy. Let’s bring these fugitives to justice and they can explain their actions to a judge.

” Chi-com”? That’s cute. No one EVER accuses anyone of being a dreaded commie anymore. Congrats to you!

John Doe, don’t forget they are well versed in and subscribe to values and writings of Marx.

I’m confused. Why do the police need our help with this? They have the license plate. Just run it and go get the criminals.

So strange when the shoe is on the other foot. Our two ways of approaching crime and punishment needs to end. We are one country. One law for all to respect.

So let me get this straight. By defacing an illegally sanctioned political message on public property in order to make a counter argument is “illegal?” To top it off, public funds were used for the original political message in the first place. So these people did the city a favor and cleaned up their own cluster F.

BLM is a Marxist organization and as such seeing long term overthrow of the US government and constitution. The way of getting there is their pay book. It starts with division of the people and escalation into violence. This way the loud minority gets their way and eliminate bit by bit freedoms of all people. 1st and 2nd amendment are first on the list.

Talk to your City Council Martinez….not sure they followed their own regulations on obtaining a permit.
12.04.090 – Findings on Appeal.
If the City Council finds all of the following to be true, the permit shall be granted:
A. That the applicant will be substantially damaged by the refusal to grant the permit as requested;
B. That no other reasonable method of obtaining the desired results is available except as proposed by applicant;
C. That the granting of the permit will not be materially detrimental to the public interest, safety, health and welfare or injurious to other property.

So? Did 99% of the Martinez “community” go to the City Council and beg and plead to have this vandalism committed on our streets? I don’t think so! The City people had NO RIGHT to issue any such permit. We are the one paying for those streets and we have a say, by golly.

Black Lives Matter is a self-proclaimed MARXIST organization whose goal is to disrupt this country! Don’t fall for their crap! Read about the three who started this idiocy.

This “mural” is DIVISIVE and HURTFUL! It should be removed immediately! Paint the entire block a solid YELLOW! If I see this vehicle, there is no way on God’s Green Earth that I will report it. No way! I might give them money for their defense so they could hire a good, expensive attorney who will kick ass!

The people who painted that BLM mural on our streets are nothing but agitators. They should be arrested for vandalism along with the city administration morons who have them the permit to do so.