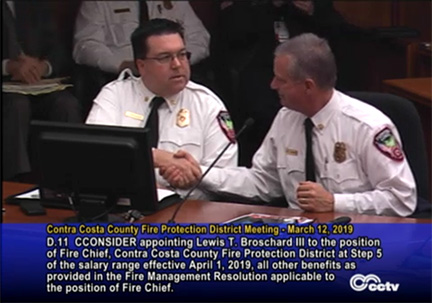 The move came after Fire Chief Jeff Carman announced he would be retiring in March.

The fire board, comprised of the Contra Costa Board of Supervisors, unanimously voted in favor of Broschard III in a 4-0 vote.

“I am really grateful for the opportunity, it is not about the fire chief, its about the team. We have an excellent team,” said Broschard. “We are working together to fulfill that vision statement of being a premier fire service leader in the industry but just doing the core work of doing good public service.”

Broschard acknowledged there was still much work ahead of them, but was looking forward to the challenge.

“I am absolutely humbled by the overwhelming support, not just from the members of the board, but from the CAO’s office, various department heads, our personnel and our labor organization as well as the other fire chiefs in the county,” stated Broschard. “We may be the biggest fire organization in the county, but we never work alone, we can’t do it alone and relationships mean everything between executives, between personnel, between districts, county districts, cities, amongst districts themselves. I am looking forward to continuing the service of fostering good relationship and getting good outcome as a result of that.”

Broschard III will take over the position effective April 1, 2019.

Background Info via the Board Packet:

Chief Broschard has a fire service career spanning over 25 years working in small and large fire service organizations. His experience includes positions and responsibilities in emergency operations, fire prevention, and executive leadership. He joined Contra Costa County Fire in 2007 as a Fire Inspector and then promoted to Fire Prevention Captain in 2009.

In 2010 he was promoted to Fire Marshal; during his tenure the Fire Prevention Bureau created and implemented its strategic plan, was successful in the first Fire Code amendment ordinance to be adopted by all cities served by the District without exceptions, and implemented a cost recovery program that enabled the District to expand fire prevention services and add personnel within the Fire Prevention Bureau during one of the most severe economic downturns.

He was promoted to Assistant Fire Chief in 2014 where he was responsible for the Contra Costa Regional Fire Communications Center, Fire Prevention Bureau, Apparatus and Fleet, Information Systems, and Facilities. During this time the District transformed the methods used for procuring fire apparatus and light vehicles in order to create a vehicle replacement program, initiated the Fire Station 16 and Fire Station 70 replacement projects and the District’s solar energy installation project.

In late 2015 he was appointed to the newly created Deputy Fire Chief position where he was an integral part of the implementation of the ambulance services contract with Contra Costa County. As the Deputy Fire Chief he is responsible for overseeing the chief officers responsible for Emergency Operations, Fire Prevention, Communications, Emergency Medical Systems, and Support Services.

Chief Broschard holds a BS in Managerial Economics from UC Davis, an MBA from John F. Kennedy University, and he is a CSAC Credentialed County Executive. He has also been certified by the Office of the State Fire Marshal as a Fire Prevention Officer; Fire Officer; and Chief Officer.