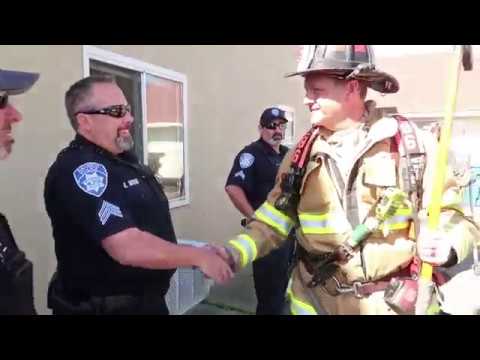 At 9:39 am Friday, Contra Costa County Fire Protection District firefighters responded to a report of an exterior fire in the 2400 block off Mitch’s Lane off Texas Street in the City of Antioch.

Upon arrival, firefighters located an exterior fire that had extended to a four-plex, a backyard, and a vehicle while threatening additional structures. There was also a report of a person confined to a bed in one of the homes attached the buildings. A rescue was immediately requested along with additional resources.

As more crews arrived on scene, the female was pulled from the home and firefighters began to make fire attack limiting the damage to building to at least one unit and the exterior of the building. This was after it was reported the fire made its way into the ease of the building.

No injuries were reported and the cause of the fire is under investigation.

According to the battalion Chief, this fire had potential to cause great damage given the proximity of a church, apartment complex and other structures. The quick actions of firefighters prevented a major incident.

Antioch Police also responded to the call along with AMR and neighboring East Contra Costa Fire Protection District. East Bay Regional Park District firefighters were also in the area and saw the smoke and responded.

OMG! Look at that place! The crap in that back yard! Who lives like that? Total slums!