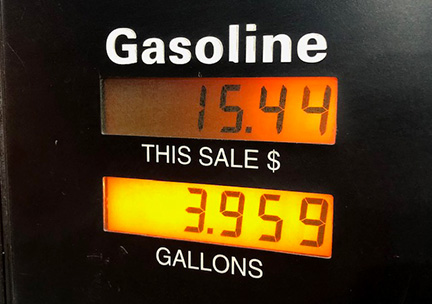 On Monday, AAA announced that the national average for a gallon of gas held steady at $2.61 while Californians are paying $4.04 per gallon.

“While most states are seeing more expensive gas prices on the week, the good news is that the majority of increases were nominal at a few pennies. In fact, only five states saw jumps of a nickel or more,” said Jeanette Casselano, AAA spokesperson. “Motorists are likely to see continued fluctuation at the pump, but not major increases in the week ahead.”

Compared to a month ago, state averages are about a 50/50 split in being either more or less expensive. The vast majority of motorists are seeing savings at the pump compared to November 2018, by as much as a quarter. Only six states are carrying averages more expensive than a year ago: California (+34 cents), Delaware (+12 cents), Nevada (+11 cents), Ohio (+8 cents), Arizona (+5 cents) and Oregon (+3 cents).

Pump prices in the West Coast region have mostly decreased on the week after the region underwent planned and unplanned refinery maintenance that caused prices to spike over the past month. Reduced supply in the region, amid robust demand, put pressure on pump prices, but the pressure continues to decrease as a result of imports and increased production from regional refineries.