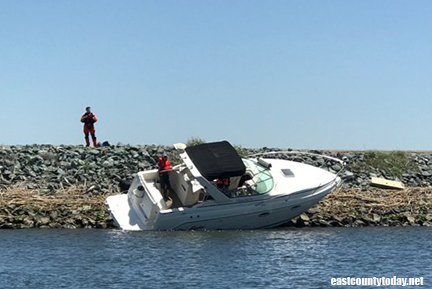 At roughly 12:40 pm Sunday, the East Contra Costa Fire Protection District and US Coast Guard responded to a report of a boat crash in the area of the 1400 block Sugar Barge Road on Bethel Island.

It was reported that a 27′ boat went into the rocks with people on board with one victim sustaining a head injury.

By 1:29 pm, units arrived on scene and reported there were no injuries and the board was being assisted by the United States Coast Guard which cancelled the balance of the incoming units.

No further information was released.

Actually no one was drinking. The boat hit some underwater rocks which launched it onto the rock wall.

Makes sense…it was low tide. They were too close to the levy.

The good news is a new fire station on cypress is about to be finished. The bad news is they probably will complain they can’t staff it without a new tax. Sadly that will be BS and hopefully no one dies. 50 minute response is ridiculous.

Shouldn’t be drunk and stupid!! There wouldn’t have to be any response time if you learned the Delta and took boater safety…………. oh yeah DONT DRINK AND BOAT. Don’t tell me they weren’t drinking either, we all know that is bullshit

Actually that is my wife standing in the boat, she was a passenger and I know it’s not true. There was no drinking, although I would agree many boat accidents happen from drinking. And even though it’s easy to name call, unless you were there you don’t know what really happened.