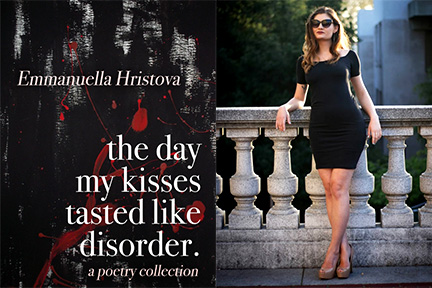 “It reads like a diary because at one point it was my diary,” said Emmanuella Hristova of Bay Point, a local author and poet, who recently published her first book of poems entitled, The Day My Kisses Tasted Like Disorder.

The Oakland native and UC Berkeley graduate has spent her entire life working on her art, and dabbled in poetry when she was in high school, but had never considered it her artistic outlet of choice until recently.

“I didn’t really start writing poetry again until I was in grad school. It was when I was in a relationship, and I fell in love for the first time, and then we broke up. Two weeks later I found out my sister was dying. That was all my first year of grad school. It was really, really difficult for me,” said Hristova.

Writing was an essential part of the healing process for Hristova and, through her words, she hopes to help others heal from their own heart aches.

“What I wrote for myself, if it could help someone else going through something really hard, whether it was a break up or losing someone they love to cancer, I wanted my work to be out there,” said Hristova.

During her time in graduate school, Hristova melded her raw emotion and inner turmoil into a book-length collection of poems, but decided to let them sit for a while until she had fully processed her feelings. When she revisited her work nearly a year later, one of her close friends urged Hristova to publish her poems. After finding an editor and assembling the manuscript for an e-book, Hristova’s work became reality.

“Editing takes a lot of time,” said Hristova, laughing, as she reflected on the process of publishing her work.

The Day My Kisses Tasted Like Disorder, was originally published online on April 13 of this year and is now available on several online retailers, like Amazon and iBooks. Because this project means so much to Hristova, her goal was to have as much agency over the production as possible. For those areas of production which Hristova could not complete on her own, she sought the help of other women for the project.

With The Day My Kisses Tasted Like Disorder now complete, Hristova plans to spend some time abroad and unwind from this venture. However, she plans to continue writing and more projects are around the corner.

“I actually started writing a novel a year ago, so this next year while I’m abroad I want to finish that manuscript. I also have another manuscript for another poetry book, but that won’t be for a while…it’s just where I keep the poetry I’m writing right now,” said Hristova.

For more information on Hristova and her artistic endeavors, visit her webesite at http://www.ehristova.com.

Alexandra Riva is an East Contra Costa County resident who is a senior at UC Berkeley where she is pursuing a Bachelor’s Degree in Media Studies with a minor in history. She is a graduate of Dozier-Libbey Medical High School in Antioch.