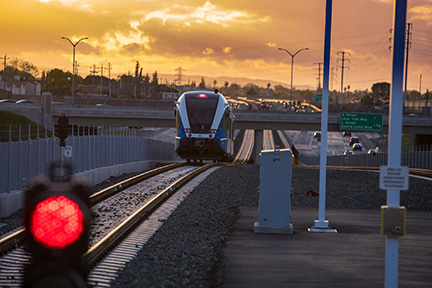 The BART Board on June 9th approved a two-year budget focused on improving the rider experience with a continued commitment to running full-service levels prioritizing a clean and safe ride. BART riders will soon benefit from trains better spaced apart, especially on Sundays and during all evening hours and increased service on Saturday evenings to better serve late-night workers and those who are taking BART to events, restaurants, and other fun activities. The budget for Fiscal Years 2023 and 2024 includes a less-than-inflation-rate fare increase effective July 1, 2022.

The budget funds two impactful service changes in the coming months designed to provide efficient, equitable, and rider-friendly service. Beginning in September 2022, BART trains will run with more consistent intervals. Currently evening service through San Francisco seven days a week and on Sundays has trains that are not well-spaced apart because of single tracking for rebuilding work. This pattern will come to an end and trains will be better spread apart, reducing wait times for many riders.

In February 2023, BART anticipates making a major investment in Saturday evening service by running five-line service until closure which increases frequency and reduces transfers for many riders.

BART’s budget supports the acceleration of hiring and training the staff most critical to putting out reliable service as BART responds to staffing challenges brought on by the pandemic. BART aims to hire more train operators and additional rail controllers, the employees who monitor and control train movement from the Operations Control Center. The service enhancements in the budget relies on being able to hire these critical positions.

The budget reinstitutes a 3.4% fare increase that was originally scheduled to go into effect January 1, 2022, but was delayed by six months. The increase will add 15 cents to the average fare of $3.78. For example, a short trip from Downtown Berkeley to 19th St./Oakland would increase five cents while a longer trip such as from Antioch to Montgomery would increase by 30 cents. The fare increase, well below the current rate of inflation, is needed to keep up with the cost of providing safe and reliable service. It’s expected to generate about $15 million in additional revenue over FY23 & FY24.

Two-year budget is a first

This is the first time the Board has adopted a budget for two consecutive years instead of a one-year budget. The shift is an effort to assist a more strategic approach to long-term financial planning.

The total proposed FY23 operating and capital budget is $2.5 billion, with the largest amounts of capital funding directed toward purchasing new train cars, Measure RR rebuilding projects, and the Core Capacity Program to significantly increase service levels. These high priority capital projects will help BART meet the needs of the region for years to come.