Antioch, CA — A good crowd turned out to watch All Star Series racing Saturday night at Antioch Speedway. The Winged 360 Sprint Car division was back to make their third appearance of the season, and Matt DeMartini gained the point lead with his second 20 lap Main Event victory.

Nick DeCarlo of Martinez returned to the Winner’s Circle in the 20 lap A Modified Main Event. DeCarlo got the pole for the race after Eric Berendsen scratched due to mechanical issues in his season debut. DeCarlo charged into the lead from the start as point leader Bobby Motts Jr came up from the fourth row. Motts managed to get up to second, but there was no way he could stop DeCarlo from getting his third win of the season. Sean O’Gara was a solid third ahead of Brian Cass and Bobby Montalvo. Cass and Motts were heat race winners. 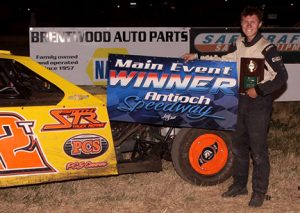 Young Tanner Thomas #21t made his first visit to Antioch Speedway and left with the Main Event victory. Photo by Paul Gould

Merced Speedway star Tanner Thomas came to Antioch Speedway about 25 years to the date from the night his father, Darren Thomas, scored an unlikely Street Stock win from the back of the pack. This time, Tanner Thomas had a front row start and led all 20 laps for the feature win. However, he had to contend with 2004 Modified champion Aaron Crowell, who made several attempts to get by on the inside before settling for second. Trevor Clymens battled from tenth starting to finish third, followed by Brent Curran and Kenny Shrader. Thomas, Todd Gomez and Tommy Fraser were heat race winners.

Reigning champion Cameron Swank picked up his second 20 lap Hobby Stock feature win of the season. Billy Garner charged into the lead at the start and led for seven laps ahead of Anthony Vigna. However, on a restart, Michael Cooper got together with Garner, resulting in a Garner spin in Turn 2. Cooper was black flagged from the race. Vigna had the lead, but it wasn’t long after the next restart when Swank charged past him and pulled away from the pack. Point leader Chris Sorensen also made a move around Vigna for second during the final ten laps of the race. Vigna settled for third ahead of Garner and Anthony Wellborn. Wellborn, Swank and Tanis Rangel won their heat races. 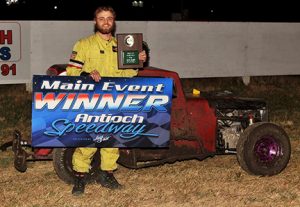 David Michael Rosa finally picked up his first career 20 lap Dwarf Car Main Event victory. Rosa started back in the fourth row and worked his way to the front. Once he got there, he had to contend with four time feature winner and point leader Mike Corsaro. However, Rosa was up to the task as he held off Corsaro for the victory. Tony Carmignani finished third ahead of Lonnie Tecaat and 2010 champion Jerry Doty.

Next week is the Third Annual Jerry Hetrick Memorial Race. All Star Series divisions include Winged 360 Sprint Cars, A Modifieds, B Modifieds, Hobby Stocks and Dwarf Cars. For further information, go to www.antiochspeedway.com.

Antioch School Board President Calls for Removal of...

Antioch School Board Set to Discuss Removal of...