Police Chief Allan Shields said an arrest warrant for murder has been issued for Sypien in the incident. 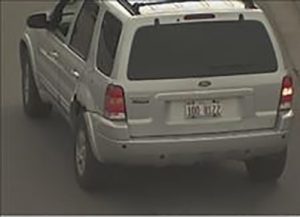 The suspect is described as a white male, 5’09”, 185 lbs, with grey hair and green eyes. His last known address is in the Dublin area. He was last seen driving a 2003 Silver Ford Escape with Illinois license plate 1008122.

Sypien is suspected of shooting John Moore, 76, in the parking lot of 3470 Fostoria Way at approximately 2:25pm.

Anyone with information on Sypien’s whereabouts or any information on this case is urged to contact police at (925) 314-3702 or via Nixle by texting “Tip DanPD’ and your tip to 888777.

The three day search for a Dublin man suspected in the shooting death of a Danville resident has ended with the suspect found dead in an Illinois suburb.

Detectives from the Danville Police Department and the Contra Costa County Office of the Sheriff this afternoon received notification from the Kane County Sheriff’s Office in Illinois that 51-year old Mark Allan Sypien was found dead after apparently killing himself near his parents’ home in St Charles, Illinois. Sypien was being sought in connection with the killing of Danville resident John Moore.

The shooting occurred Sunday, February 24, 2019, at about 2:25 p.m. Danville officers were dispatched to the 3400 block of Fostoria Way for a report of gunshots. Officers arrived finding Moore suffering from gunshot wounds. He was pronounced deceased at the scene.

Investigators identified Sypien as the suspect in the killing, and an arrest warrant for murder was issued. Detectives continue to work with their counterparts in Illinois on the case.

“While we regret the further loss of life, we are pleased that we were able to resolve the case,” said Police Chief Allan Shields. “We are very grateful for the collaboration and assistance of the Contra Costa County Sheriff’s Office in investigating this crime and bringing closure to the family and friends of Mr. Moore.”

Anyone with any information on this case is asked to contact the Contra Costa Sheriff’s Office Investigation Division at (925) 313-2600. For any tips, call 866-846-3592 to leave an anonymous voice message or email:

AAA Predicts Thanksgiving Travel to Rebound to Near...

He saved the taxpayers money.