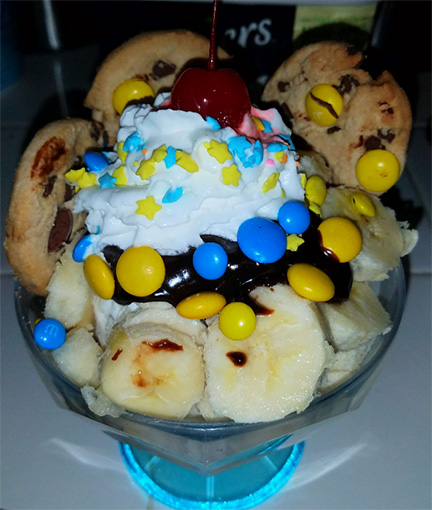 Food and sports. For many, they represent two popular pastimes of our society; a one-two punch that has historically made up the foundation of many celebratory occasions over the years and a reason to bond with family, friends, and fellow sports fans.

Having lived in the Bay Area for most of my life, I grew up rooting for the Bay Area sports teams; 49ers, Sharks, Giants, and Warriors. I generally pay attention to most sports, particularly our Bay Area teams, but anybody who knows me well, knows that I am extremely passionate about the San Francisco 49ers and San Jose Sharks.

Two years ago, when the San Jose Sharks began that season’s playoff run, I thought I’d celebrate each playoff victory by making an ice cream sundae. For those who are unaware, for many seasons throughout their 27-year history, the Sharks have had many incredible regular seasons, but for some reason, it didn’t always translate to success in the playoffs. As such, playoff victories I felt, could never be taken for granted, especially if you’re a Sharks fan. The sundaes were my own little way of celebrating and appreciating wins in the playoffs, since I never knew if the most recent playoff victory would be the last for the season. It also gave me an excuse to eat some ice cream!

Little did I know that the Sharks would go on their most successful playoff run in their history and to date; reaching the Stanley Cup Final, only to lose to the Pittsburgh Penguins in six games. The Sharks won 14 playoff games that year, which meant a LOT of ice cream sundaes.

At first, I kept it very simple. A few scoops of ice cream, a banana, some hot fudge, and strawberry and pineapple toppings. I was never a huge fan of whipped cream or maraschino cherries, but eventually started using them more since they “enhanced” the look of my sundaes. Next, I started putting them in special Sharks’ souvenir cups. Then I started getting creative and cut cookies or slices of cake in shapes of shark fins. I then found some gummy shark candies and started using those too. Thus, the “victory sundae” was born!

Since the Golden State Warriors have unquestionably been the hottest sports team in the Bay Area during the last three or four years, I figured it would only be fitting do a “victory sundae” for the Warriors too. 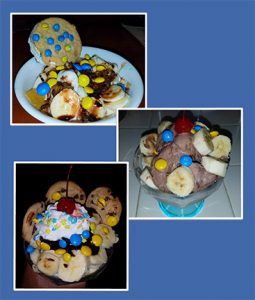 Since the Warriors’ colors are blue and golden yellow, I knew I would have no problem making a “Warriors-themed” victory sundae for their title win last year. Along with the obligatory ice cream, hot fudge, and bananas, I threw in an M&M cookie ice cream sandwich, along with switching out the M&M’s to only blue and yellow ones. For their Conference Final victory this year, I kept it simple, using blue M&M’s and yellow Reese’s Pieces.

While the 49ers unfortunately haven’t given us any reason to “celebrate” during the last several years, I am optimistic about this past off-season, and I look forward to experimenting with more “victory sundaes” for the 49ers and Giants shall the opportunities present themselves (IE: make the playoffs and win). And of course, shall the Sharks and Warriors make deep playoff runs again next year, I’ll definitely mix some things up and try and get more creative.

For me, the victory sundae is just a way to celebrate two passions in life; sports and food, particularly ice cream. Granted, there are sports team-themed decals, decorations, and even sports-themed food. And while my homemade victory sundae may not be aesthetically pleasing as other people’s creations, or maybe not as fun as say, a celebratory toast with beer or champagne, it is my own unique way of paying tribute to my favorite sports team, while finding a perfectly good excuse to enjoy a sundae. The way I see it, the more playoff wins, the more championships, and the more sundaes!

This is my way of celebrating my favorite sports team. What is yours?