On Tuesday, the Contra Costa County Board of Supervisors agreed to move forward on a comprehensive plan aimed at tackling illegal dumping in the county.

Prior to implanting the strategy, the Board of Supervisors agree to create an ad-hoc committee to monitor progress and push county staff forward on the plan.

On Tuesday, Staff presented a summary with 56 possible strategies to combat illegal dumping in which 10-provide a price tag of an estimated $378,000.

Some of the strategies include:

These recommendations and background materials pertaining to illegal dumping in Contra Costa County were prepared by a team from five different County departments which included:

On February 25, 2019, the interdepartmental team hosted a countywide meeting about “Collaborative Strategies for Reducing Illegal Dumping in Contra Costa County” to share information and facilitate coordination among local jurisdictions in the County.

Representatives from a range of different Departments in all nineteen cities were invited and encouraged to attend. Approximately 35 people attended, including representatives from the following ten cities: Antioch, Clayton, Concord, El Cerrito, Hercules, Oakley, Pittsburg, Richmond, San Pablo, and Walnut Creek–document showing how each city deals with illegal dumping. 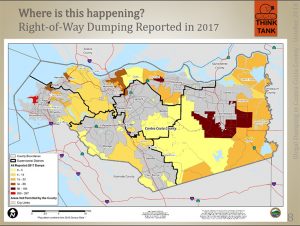 During the presentation, Supervisor John Gioia brought up the idea of Liens be placed on illegal dumping penalties stating Richmond has the ability to place tax liens.

It was stated during the presentation that at this time, they were only exploring the idea of tax liens.

“Why can’t we just direct it as part of this,” replied Gioia. “I worry we explore, explore. We get a report. It’s a year… this has gone on for a long time.”

Supervisor Diane Burgis stated she would like to create an Ad-Hoc Committee to keep this going to prevent this from coming back in another 10-years.

Gioia again asked why they couldn’t direct vs. explore and it was stated because they haven’t validated the legal authority to place tax liens.

Gioia liked the idea of creating an ad-hoc committee or some form of a committee to meet regularly on this.

Burgis requested to be placed on the ad-hoc committee.

“This was something that was very important to my community and that is why we got things cooking a little bit more and just want to compliment the staff, there has been a lot of really good communication and thoughtful strategizing on how to do this and I’d love to be involved with that ad-hoc committee,” stated Burgis.

Supervisor Karen Mitchoff suggested they form the ad-hoc committee and they report back within 90-days so the strategies outlined can be discussed and provided with updates from legal counsel of what they can or cannot do with changing ordinances and concepts of where the new money his going to come from.

Mitchoff requested they come back by Sept. 30 with a report on all these strategies and with the funding identified with the concept the ad-hoc committee monitor progress.

Supervisor Candace Andersen highlighted this is a problem in the entire county and they have tended to piecemeal this topic but each of their districts have had to address illegal dumping.

“It’s those hotspots those identified areas and I like the fact you have lots of different strategies to approach it because there isn’t going to be just one that fits every situation” said Andersen.

The committee will consist of Burgis and Glover.

COLLABORATIVE LEGISLATIVE EFFORTS: Representatives from Alameda and Contra Costa counties are working together to pursue legislation to address shared needs to more effectively address illegal dumping in our respective jurisdictions. The County’s adopted 2019 State Platform includes the following sponsored-legislation proposal related to illegal dumping, which resulted in AB 1216 specific to our two counties:

Seek legislation, in conjunction with Alameda County and other partners, and support legislation that specifically establishes statewide hauler permitting requirements and associated penalties as well as increases penalties allowed by State law for illegal dumping.

The 2019 State Platform also includes the following related policy which pertain to AB 215 and SB 409:

SUPPORT efforts that will help counties more effectively combat illegal dumping, including but not limited to establishing a more reasonable burden of proof standard, changing any remaining infractions to misdemeanors and increasing penalty amounts or options (e.g. vehicle seizure).

At the County’s Legislation Committee meeting on May 15, 2019, the Committee members approved the recommendation by the interdepartmental Illegal Dumping Think Tank team that they consider recommending to the Board of Supervisors a position of “Support” on three bills related to illegal dumping: AB 215 (Mathis), SB 409 (Wilk), and AB 1216 (Bauer-Kahan). Two of these bills are no longer moving forward (AB 215 and AB 1216). The Board will consider the Legislation Committee’s recommendation related to the third illegal dumping bill, SB 409, at the meeting on June 11, 2019. All three bills are summarized below.

AB 1216 Summary: (this bill is no longer moving forward) Would have authorized the counties of Alameda and Contra Costa to establish a pilot program to employ 2 law enforcement officers, one from each county, solely for the purpose of enforcing dumping laws in those counties. Potential state general fund revenue to support AB 1216, pending Legislative action on the State Budget.

SB 409 Summary: Increases the allowable fines for illegal dumping, expand the crime of illegal dumping to include the transporting of waste matter, rocks, concrete, asphalt or dirt for the purpose of dumping, makes it illegal to transport commercial quantities to dump in specified locations, and makes it a crime to dump, deposit or receive waste matter on private property with owner consent without any required permit/license.

AB 215 Summary: (this bill is no longer moving forward) Would have made dumping waste matter on private property, including on any private road or highway, without consent of the owner, punishable with specified fines. Requires the fine to be doubled for a fourth or subsequent violation if the prosecuting attorney pleads and proves, or, in an infraction case, if the court finds, that the waste placed, deposited, or dumped includes used tires.

County staff will continue to work through our state legislative advocate to pursue new legislation to implement the Board’s adopted legislative goals related to illegal dumping. In addition, staff is evaluating options for increasing the severity of consequences for violations of the Hauler Ordinance.

ABOUT US
We focus on Antioch, Bethel Island, Brentwood, Discovery Bay, Oakley and Pittsburg,. We will also feature materials relevant to Contra Costa County and political news out of Sacramento.
Contact us: [email protected]astcountytoday.net
FOLLOW US
© 2017 eastcountytoday.net | Privacy | Terms of Use