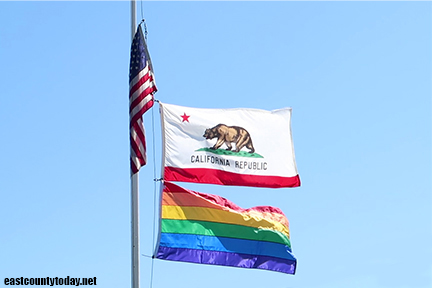 On Tuesday night, the Antioch City Council voted unanimously to recognize June as LGBTQ Pride Month in the City of Antioch and agreed to fly the rainbow pride flag at city Hall for the remainder or the month.

Prior to voting on whether or not to raise the flag, the council heard from about 45-minutes of public comments that ranged both in support and against raising the rainbow flag.

Mayor Pro Tem Joy Motts thanked the city attorney for crafting a resolution that expresses the difference between government speech and First Amendment Speech and proceeded to read the resolution:

This resolution does not open the door to any organization, secular or not that wishes to promote it’s cause to the contrary. It allows council to consider request of support such as a display of the flag that support historic civil rights movements that strive for equal rights and equal protection under the laws of our country.

She then stated her support.

“I believe that in our democracy it is incumbent upon government and all of us to fight for dignity and equity for all, especially the most vulnerable and marginalized better among us, if not government, than who, I support the resolution,” said Motts.

Councilmember Lamar Thorpe also supported the resolution highlighting how his mother was gay.

“Some of the comments that I heard, he hurt me to my core. When I hear people talk about people who we persecuted, who the mom, who I didn’t get to live with, because of her identity and who she was, and living in absolute shame.  So from my vantage point, this government, our government that was once reminded, constituent once said to me, it’s so good that Antioch is finally catching up to it’s public because the public has been there on many issues in this government have lagged behind,” said Thorpe.

Thorpe then made the motion to support the resolution which was seconded by Monica Wilson.

Councilmember Lori Ogorchock stated that religion cannot come into her position and this topic comes down to what is fair within the city. She admitted she was leaning in going one direction, but after doing her homework she found that the American flag goes first and there are other flags that go below.

She continued by highlighting this topic has been hard because opinions have been “diverse” and torn between two sides and she had to look at this for the city as a whole, not just her as a person.

“With that, I have to be in agreement,” stated Ogorchock.

Councilmember Monica Wilson thanked the community for sharing their opinions tonight because that was what it was like to live in a Democracy.  She also highlighted how Antioch is an inclusive town.

“I feel that we are now at a point where we are very inclusive. I do see the flag as being very inclusive. I support this resolution. I’ve supported this resolution. I think like council member Thorpe has said any off, we’re catching up, we’re catching up, we’re showing that we’re showing people throughout California and throughout our nation that, that we are inclusive,” said Wilson.

She also highlighted that other groups can now come to the council and they can look at possibly hanging their own flag.

“We can make a decision if it’s going to be a group that’s going to be very inclusive and bring people together, not groups that spread hate, that will sit there and threaten people and shoot people because of their views, their color, their skin and the religion that they choose to participate in.” said Wilson.

At that point, Ogorchock suggested that a flag policy be put in place so there is no discrimination among who wants to raise the flag.

Mayor Sean Wright noted this item was something he had been thinking about for a year after it came to the council last year but could not fly the flag because they did not have a policy in place while noting his goal with the proclamation was to let his LGBTQ friends know that he loves and respects them,

“Then we move forward into, I wish, a policy and a true policy discussion about should we raise flags? Because what then has come is, is a real binary, if you raise the rainbow flag, you love and respect me, but if you choose not to, then you don’t love and respect me. That has become the true binary and I wish I could have a vote that says, I don’t think we should raise any flags. I don’t, I personally don’t think that should be the role of government. I don’t think we should be in that. We can disagree on that. But if I believe that that should, I wouldn’t want the binary on that to be that I then don’t love and respect,” explained Wright.

“What’s before us tonight is not a policy on should we raise flags, any flag, because if that were that were the case. My vote would be no, but because I truly want to show that I love and respect, I truly do. My LGBTQ friends, I will be voting yes tonight,” said Wright. “But as we bring the policy back, should we raise flags? I would probably be voting no, because I don’t think that’s what we should be doing. But it’s not because of who you are. It’s because a policy decision. And in America, if we cannot get to the point where we can have policy discussions and disagree amiably where we respect one of the other’s beliefs, not because of who we are, but because we see things differently. We’ve got to get to that point as a nation where we can have dialogue and conversation and come to the point where even though we may disagree on a policy, we can still love and respect one another. So, understand tonight’s vote is to show you that the policy I do disagree with, but I want you to know that I love and respect you. And so I will be voting that way.”

Editors Note:
This item returned to the council because during their last meeting, the proclamation was not accompanied by a resolution for raising the flag. It needed to be separate and was an administrative oversight by the city attorney.