There will be a rally at noon on July 25 in preparation to the Governor and Secretary Ken Salazar  from the Department of the Interior on Brown’s plan to build the peripheral canal/tunnel.  If you are interested in participating, you should contact Restore the Delta so that you can coordinate with their efforts.

“The Governor claims California is on his side on this issue and they’re not. Our coalition of farmers, environmentalists, fishermen, business people, local elected officials concerned citizens is diverse. And yet, all these different people know that the proposed project will destroy the Delta’s ecosystem and the economy,” said Barbara Barrigan-Parrilla.

She is hoping for a big turnout to let the Governor know he is wrong.

It should be noted that more and more facts are coming out that their are better options than a canal in terms of cost which Restore the Delta stated May 11, 2012. I listened to their audio summarized the key points. Its stunning to me how the Governor can even continue to push this project when its significantly cheaper and more cost effective to simply invest in updating the levees.

Here is a Press Release from Restore the Delta. 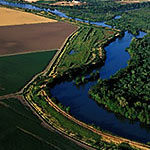 We understand that Governor Brown will be making an announcement on July 25th, 2012 with Secretary Ken Salazar from the Department of the Interior on Brown’s plan to build the peripheral canal/tunnel.

Please join us for our response to his announcement with your homemade signs on the West Steps of the Capitol at noon on  Wednesday, July 25, 2012.

Governor Brown’s plan, an enormous mistake, would exterminate salmon runs, destroy sustainable Delta family farms and saddle taxpayers with tens of billions in debt, mainly to benefit a small number of huge corporate agribusinesses on the west side of the Central Valley.

Ironically, we anticipate that he will try to sell his plan to California water rate payers and tax payers as a new “process” to save and restore the Delta.  Join us as we let him know that the best way to restore the Delta is to fix the levees, reduce water exports, restore flows through the Delta, and support water projects throughout California that will make all regions water self sufficient.