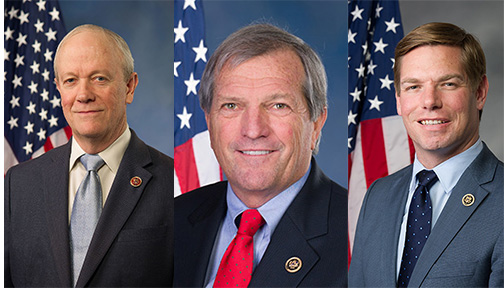 On Friday, local members of congress issued statements after a drone attack authorized by President Donald Trump that killed Iranian Gen. Qassem Soleimani in Bagdad. Trump said he did not order the death of Iranian General Qassem Soleimani to start a war but to stop one.
‘Soleimani was plotting imminent and sinister attacks on American diplomats and military personnel, but we caught him in the act and terminated him. Under my leadership America’s policy is unambiguous to terrorists who harm or intend to harm any American. We will find you. We will eliminate you. We will always protect our diplomats, service members, all Americans and our allies,’ Trump said.
Trump Tweeted:
General Qassem Soleimani has killed or badly wounded thousands of Americans over an extended period of time, and was plotting to kill many more…but got caught! He was directly and indirectly responsible for the death of millions of people, including the recent large number of PROTESTERS killed in Iran itself. While Iran will never be able to properly admit it, Soleimani was both hated and feared within the country. They are not nearly as saddened as the leaders will let the outside world believe. He should have been taken out many years ago!

“Last night’s deadly military strike against Iran’s top general was alarming and represents a massive escalation against Iran that Congress was not consulted on. I join House Speaker Nancy Pelosi in demanding that we work to avoid potential retaliation.”

With no congressional approval or consultation, the president launched targeted airstrikes and has now ordered thousands more soldiers to a region of the world that he promised to withdraw American troops from. None of us will shed a tear for Qasem Suleimani – he was a murderer, responsible for the deaths of hundreds of American troops and thousands of innocent civilians. But once again this president has acted without any thought for a long-term national security strategy, and put more Americans’ lives in danger. Our founding fathers created a system of checks and balances to ensure this kind of reckless behavior could be stopped by a co-equal branch of government. We cannot allow the sole power in the executive to force our nation into another senseless war.

I fear that last night’s strike constitutes the Trump Administration’s biggest and most consequential foreign policy blunder to date. These killings will not be judged by their deserving targets, but by President Trump’s overall strategy in the region, or lack thereof, and the ability to prevent further escalation and protect U.S. personnel, assets, and our allies in the days and weeks ahead. My thoughts are with the U.S. servicemembers and civil servants now in harm’s way.

The U.S. airstrike that killed Iranian Maj. Gen. Qassim Suleimani in Baghdad is a dramatic escalation of tensions in the region, and a departure from our longstanding foreign policy practices, undertaken without any congressional notice or approval. No American family will mourn Suleimani’s loss, but every family should be concerned this killing brings America closer to a war we must avoid.

I was briefed Friday as a member of the House Permanent Select Committee on Intelligence, but I still have many questions. The President must show the American people whatever specific intelligence he has to support this action; a legal justification for taking this action without a proper congressional authorization for use of military force; and a strategic rationale with a concrete plan for dealing with its inevitable consequences.