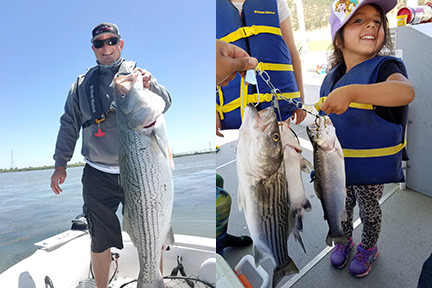 Isleton
Striper Trolling and plug casting has improved  the last few days. Dirty “D” has been much better this past week.  Trolling the Angry Eyes and Savage Preys is the best bet.  Sturgeon anglers moved West .   Catfish start to show in better numbers with Mackerel.

Warm seasonable weather ahead finally for Holiday anglers, and forecast is Awesome. Shore bound anglers are scoring both species. The best place to score a striped bass or sturgeon remains Sandy Beach and  the area of the Power Lines, use Sardines or Shad. Trolling is scoring many limits stripers and occasionally, a 10-12 pounder caught.  Savage Prey and P-line Angry Eye lures are key for the trolling anglers.

Walnut Grove
Trolling  baits colors 8 to 10 foot deep is key as the spring push (While Late) continues. The Dirty “D” is clearing its name and conditions are improving for Black Bass in the area. Spinnerbaits and Swim jigs are working in the Hog Area. Bank anglers tossing shad and Lug Worms prevail for an occasional  Striper those looking for bigger bites.  Drifting live baits for stripers cracking the 10 pound plus keeps anglers smiling..

Central Delta
Most Blackie anglers are sticking with Buzz Baits and Whopper Ploppers. 6Th Sense Poppers are a player now as well. Larger Stripers had another cameo appearance this week yet it was very brief. Crappie and Bluegill also had a improvement this week.

Frank’s Tract
After being beat up by crazy winds for a weeks, we some of the best water conditions of the year. Black bass bite is at a consistent yet,  tougher than normal bite. Green Man Bear Pigs and Beavers  also working well. We are seeing a few big Black Bass with ¾ ounce Jigs.  Others looking to score are starting to buzz Zoom Frogs and Accent Buzzbaits.

West Delta
The stripers are here anchovies and sardines in many areas for bank anglers, Antioch Pier and along Sherman Island rd.  Stripes to 27 pounds have  grabbed tossed lures  . Trollers it’s getting started on both sides with Red Barn being the top choice, if they aren’t there move to the Eddo’s Side. Chartreuse patterns are the best bet.

Los Vaqueros
A potpourri of opportunity I was reminded this week by a new friend that Catfish Stripers and Trout are all available there now.