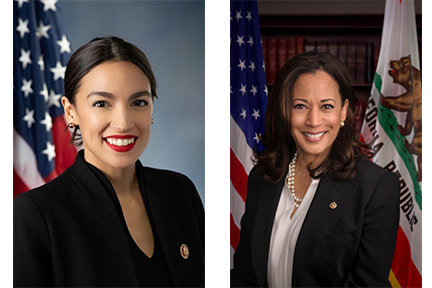 WASHINGTON, D.C. – U.S. Senator Kamala D. Harris (D-CA) and U.S. Representative Alexandria Ocasio-Cortez (D-NY-14) on Wednesday introduced the Fair Chance at Housing Act of 2019, legislation to remove barriers to obtaining federal housing assistance for individuals with criminal records and their families. The proposal is a comprehensive reform of the eviction and screening policies so individuals with a criminal history have a fair chance at housing assistance.

“Too many people become involved in our criminal justice system and serve their time only to return home to face additional barriers to employment, education, and housing,” said Senator Harris. “As our country continues working toward much-needed reform of our criminal justice system, I am proud to work with Congresswoman Ocasio-Cortez to ensure formerly incarcerated individuals and their families have access to safe and affordable housing as they transition back into their community. By requiring a higher standard of evidence and a more holistic review process, we are taking a significant step toward giving Americans a fair chance to succeed.”

“I am proud to join Senator Harris in introducing the Fair Chance at Housing Act. This legislation is one of many steps that need to be taken to repair our broken criminal justice system,” said Representative Ocasio-Cortez. “The denial of basic necessities to formerly incarcerated people does not make our communities safer. Denying housing to those that have been formerly incarcerated increases recidivism. Today we are taking a step to make our communities safer.”

The Fair Chance at Housing Act of 2019 represents a comprehensive reform of the eviction and screening policies for federal housing assistance, such as Public Housing and the Section 8 Housing Choice Voucher program. The legislation rolls back harmful policies that continue to unfairly threaten tenants with eviction for minor crimes in the absence of sufficient evidence, allow for the termination of the tenancy of an entire family because of the criminal activity of a guest even without the knowledge of anyone in the household, and continue to create unfair barriers to federal housing assistance for individuals who are trying to rebuild their lives.

This legislation aims to reduce recidivism by helping ex-offenders find stable housing and ensuring those currently receiving federal assistance are not unfairly evicted. For decades, the War on Drugs has done far more harm than good, wreaking havoc on American families through mass incarceration while having a very limited impact on rehabilitation. Moreover, these efforts have had profoundly disproportionate effects on minorities, who have historically been the primary target of harsh anti-drug policies. The consequences of these now-debunked policies reach much farther than the doors of our prisons. A criminal background can have lifelong implications for a person’s ability to obtain housing, employment, education, and to otherwise rebuild their lives. Access to stable housing in particular is one of the most important first steps to rehabilitation, but federal laws continue to pose unnecessary and punitive barriers to federal housing assistance for those with criminal records.

The Fair Chance at Housing Act of 2019 would:

In sum, by preserving the ability of PHAs and owners to protect the health and safety of their properties, while simultaneously rolling back unjustified policies, this bill would reduce recidivism by helping ex-offenders find stable housing upon exiting a jail or prison. It would also help prevent homelessness by ensuring that individuals and households currently receiving federal housing assistance are not unfairly evicted.

“The NAACP is pleased and proud to support this much-needed legislation by Senator Harris,” said Hilary O. Shelton, the Director of the NAACP Washington Bureau and the Senior Vice President for Policy and Advocacy. “This bill will assist the Public Housing Authorities but, perhaps more importantly, it will help people who have been incarcerated rebuild their lives after they have paid their debt to society. It will also go a long way to ensure that families are not punished for the poor or criminal actions of a single family member.  This legislation represents an essential step toward reducing recidivism by helping ex-offenders find stable housing upon exiting a jail or prison and by keeping their family free from punishment by association.”

“Every American deserves to live in safe, decent, and affordable housing on fair terms,” said Marc Morial, president and CEO of the National Urban League. “Many of our most vulnerable Americans live in public housing – seniors, children, persons with disabilities, and those living in poverty. These folks live under the looming risk of eviction because of harsh and arbitrary policies that penalize a family because someone in a household has been accused of a minor crime. The Fair Chance at Housing Act addresses this unfairness by reducing barriers to federal housing assistance for individuals who are trying to rebuild their lives. This bill is long overdue.”

“On behalf of the National Low Income Housing Coalition, I commend Senator Harris and Representative Ocasio-Cortez for their leadership in introducing The Fair Chance at Housing Act,” said Diane Yentel, president and CEO of the National Low Income Housing Coalition. “By ensuring that returning citizens have a real opportunity to access federal housing assistance and rejoin their families and communities, this bill reduces the obstacles to housing that often prevent people from getting back on their feet after serving their time in jails or prisons.”

“If enacted, the Fair Chance at Housing Act would take a huge step in rolling back harmful policies that increase homelessness and force families to make choices between staying together and staying housed,” said Shamus Roller, Executive Director of the National Housing Law Project. “I applaud Senator Harris and Representative Ocasio-Cortez for introducing criminal justice reform legislation to help provide housing opportunity and stability to people who need it the most, including those with criminal records.”

WOW! I’m at a total loss for words.

These two political socialist lunatics have no idea the problems they keep introducing to the American citizens. They are radicals with radical ideas the will ruin our country if allowed. No support for either is the common sense way.

WOW! This puts it over the top. Kamala Harris was going to get my vote but not anymore.

Two racist idiots trying to cater to the garbage in society! Sucking the tax dollars of the working people to support trash!!

Ocasio-Cortez is part BEAVER (teeth) and part INSECT (eyes) with a nose someone put into a VISE and squeezed flat. If that’s not bad enough, this creature has NO BRAIN! She’s being fed information by Cornell University Law Professor Robert Hollett. He doesn’t dare speak up or his job would be on the line, so he uses this creature to get his message across. This is information from a cousin who attends Cornell Law.

I guess crime and punishment doesn’t exist. Just those who have and have not.

But they are the whitest teeth I have ever come across…Oh wait…that was Willies line.

Sounds fair? How about a fee structure that allows the criminal to retain housing with conditions that make sense. Yes, for each violation in the housing rules, the tenant gets to stay and those reported here to support this bill are taxed an additional 10% on their state taxes. This is financially fair as the cost to the HSA and owners will increase much more that 10% in the cost of investigations and damage done by the criminal who gets to keep the housing. I am sure if their own finances are in effect, the law will be amended to be fair to all except the criminal causing the mayham.

Are you aware that you can be bounced from much public housing simply because an ambulance showed up at your residence? Almost invariably, an ambulance has a police escort, and one or more fire trucks accompanying it, thus you have become a hazard to the other residents simply because you NEEDED that ambulance.

Never heard an ambulance visit is a violation of the housing rules. I encourage all who have just read this to verify this with me.

This state is on track to fail. Keep it up idiots.

I wish we could post political cartoons in this site. I have some great ones regarding Ocasio-Cortez and Nancy Pelosi.

When someone asked Alexandria Ocasio-Cortez what she thought about ROE VS. WADE, she responded,

“I don’t care how illegals got across the Rio Grande River to get to the U.S.”

Now, THAT is hilarious! She’s so dumb that she can’t tell the difference between “ROW’ and “roe.”