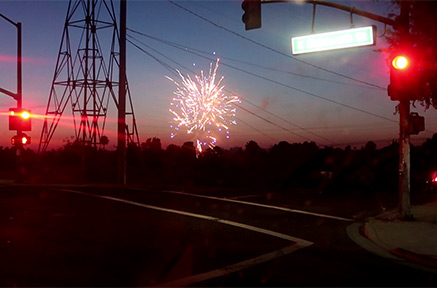 Antioch Police Chief Tammany Brooks confirmed Tuesday that over the 4th of July Holiday weekend, they received a total of 203 complaints from the community regarding illegal fireworks.

Between July 4-7, officers issued a total of 6 citations after they up-staffed to ensure public safety.

“Depending on the type and amount of fireworks possessed, offenders could face fines of up to $5,000 and possible imprisonment,” said Chief Tammany Brooks, Antioch Police Department. “We encourage everyone to obey the law, not only for their safety, and the safety of everyone around them, but also to avoid the potentially negative life impacts a fireworks arrest can cause.”

Contra Costa County Fire reported that on July 4, over a 6 hour period, they responded to 37 fires. They also stated that 5 of them were confirmed linked to fireworks, but noted it was likely the majority, if not all, were results of fireworks.

In the video below, fireworks off Wildhorse resulted in multiple spot fires from a firework explosion.

Just goes to show they don’t take the law seriously, and if they don’t, they can’t expect the citizens to. The amount of illegal fireworks this year was worse than ever!

On Putnam alone in two blocks at 10 at night I had to stop my car twice because of large fireworks being displayed between cars. Many kids and adults just standing there very close. It was very dangerous and had it fallen over shot straight into a house, car, or people.

Assholes are still setting shit off

The Antioch PD should have had 203 ARRESTS, not just citations! Some scumbag even posted on NEXTDOOR urging people light up as many fireworks as they could and make sure they are the loudest! He even posted his name and location. That should have given the PD a clue. I hope they got him!

Not surprised. They do everything to avoid doing their jobs. No less than 10 very loud shots or very loud fireworks last night even on my street. Never see APD. If you have to call, can’t get through so there were probably just as many of those calls too that don’t even get counted. A real disappointment if you own a home. By the way, Antioch was on the list of the worst cities for home buyers on KTVU this morning. City Council not good for homeowners either.

We’ve lucked out in our neighborhood because no one set off any fireworks. They learned their lesson last year when one of the neighbors came out with a sawed-off shotgun and dared any scumbag to try it. He was suffering from PTSD and was ready to take them out. In 2017, a few houses caught fire as well as some fences and trees.

Pretty stupid of that person to come out with an illegal weapon while trying to represent the Military. What a fucking faggot. You win the award for dumbass of the day

So, who’s representing the military? If our powers-that-be REFUSE to do anything about this pestilence, then WE WILL DO IT FOR THEM …… Maybe you’re one of those who is setting those fireworks! Don’t be so complacent! You never know whom you can SET OFF!

There are a lot of former military people here who are suffering from PTSD and I would not want to do anything to provoke them. If they react, then who would blame them.

Hey Stupid ass! You win the award for Dick-Of-The-Day! But I guess you can’t help it!

Cops should be spread out in the areas which seem to have more idiots who set off fireworks way after the holiday has long passed. They should fan out and be within minutes to those venues. You can smell the stench form those fireworks for a long time, so the cops would know where they are being set. One can hear and feel the BOOM, but it’s hard to tell which house it’s coming from. If you don’t provide the exact address, the cops won’t come. That’s why you should take care of the problem yourself or with your neighbors.

They dont care about fireworks, the big money is catching DUIs. $10,000 a head.

With the police being overwhelmed by these scumbags shooting off fireworks and disrupting neighborhoods putting them in danger of fires, people will have to deal with this problem by themselves. This will get nasty but it has to be done. Forget calling the police.

6 citations! They should have been able to get at least 60 just from personal observation while on patrol! It’s just not taken seriously.

To Antioch Chief of Police, Tammany: Regarding your statement “Depending on the type and amount of fireworks possessed…” It’s the NUMBER of fireworks, NOT the “amount” of fireworks. See the difference?Fireworks are UNIT! Units are described as NUMBERS. See what I mean?

Lola, for some reason many people never learned when to use words like “number”… “amount” …. “fewer” “less” … “figure.” Maybe they were absent the day this was taught in their elementary English language class. The one which really bugs me is someone saying “less calories.”