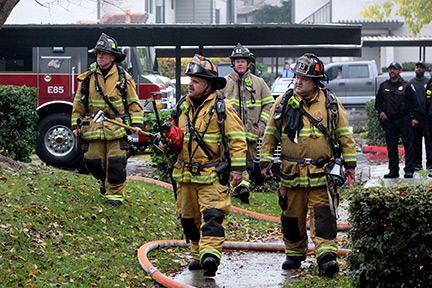 Earlier this month, vote by mail ballots for Measure A arrived to residents serviced by the East Contra Costa Fire Protection District. If approved by voters, it would drop the number of Board of Directors from nine to five.

Voters should SUPPORT Measure A and vote “yes”.

Measure A only needs to be approved by a majority of voters which concludes on March 6, 2018. In November, the public would then vote for five board of directors that will become the first elected board in District history has its been appointed members since District inception.

The District is currently made up of:

To date, the seats are filled by what seemed to be a game of political musical chairs where up until 2015, only city council members served on the board. It also created a lack of consistency as Board members often jumped on and off the board. There was also no accountability by those who served on this board.

What started out with good intentions to protect the district as a whole where each community had representation has turned into border wars and protection of each city’s stations. Thankfully, city council members got off the board, for the most part, and community members began working in a manner that was best for the overall district.

While the debate is still active over “At Large” vs. “Districts/Wards”, especially with the threat of a lawsuit which has hit many city’s and school districts in the county, that debate will continue into 2020 and is a separate issue. Measure A is simply about reducing the size of the board from nine members to five members.

Right now, East Contra Costa Fire has the largest board of any board in the County. Its size is unnecessary, redundant and creates added work level to District staff—think of the movie Office Space, does the fire chief really need 9-bosses?

Three of the main focus areas of why the community should support Measure A include:

Accountability:
Since the Districts inception, the fire board has been shielded by City Council status. Regardless of how good or bad of a job the board did, it was nearly impossible to get them off the fire board—same goes for the appointments of community members. The City Council just couldn’t remove a board member once appointed because they felt like it. The community had no say or ability to take action for a lack of inactivity, unnecessary punting of issues and failure to do their job.

Reduce the Possibility of Appointments
On a board that is probably the most thankless job in the county, its currently unpaid and you undertake a lot of fire from the public who want more stations and service. Running a campaign for an unpaid position is tricky.

Those that want the position will spend the money ($10k and up) and put in the work. Others, will simply fill out the paperwork and let the cards fall where they will ($500). The District is 250-square miles and basically the size of a county supervisor seat who spend more than $100k each election.

At the end of the day, its easier for the voting public to find five good candidates versus nine decent candidates. It’s not to say the intentions of some candidates are bad, but the quality is diluted with nine as already observed by the current board size.

Furthermore, if the District fails to get nine candidates to even run, the Board is then out looking for appointments to fill vacant seats—the community needs to avoid that situation as depending on the dynamics, it could create a scenario where appointments come from specific cities versus qualifications.

For the District to pass anything, it currently needs five “yes” votes. If voters approve Measure A, much like city council’s, only 3 “yes” votes are needed.

Final Thought:
While some in the community are attempting to smear Measure A by trying to complicate the issue by applying it to other District issues such as the budget, firefighter pay, director salary, and even station locations. None of those issues relate to Measure A.

To date, since launching ECT, Measure A is probably the most straight forward Ballot Measure to hit voters by simply attempting through a vote of the public to shrink the size of a fire board from 9-to-5.

The public should support Measure A with a “YES” vote.

Voters may vote by returning their ballots to the County Elections Division in person or by mail.

Ballots also may be dropped off at any of the following locations:

Voters do not need to drop off their own ballots.  County Elections will accept properly completed ballots that are dropped off by a person other than the voter, such as a family member or a friend.

The County Elections Division will certify the results of the election no later than April 5, 2018.