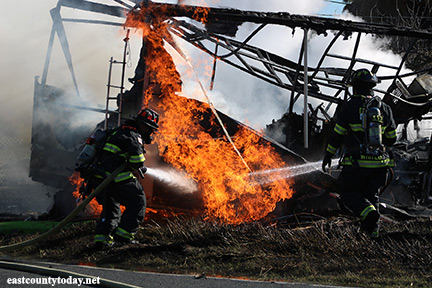 The East Contra Costa Fire Protection District reported that in the month of December they had 732 service calls with an average response time of 8:10 minutes.

During the month of December, the District responded to 5 structure fires, 1 commercial structure fire, 7 vehicle fires, 3 large vehicle fires, and 5 vegetation fires. The District also responded to 23 vehicle crashes, and 2 vehicle accidents with rescue. They also had 5 vehicle vs. pedestrian calls, 1 motorcycle crash, and 3 bicycle accidents.. The District was also able to participate in its second Mutual Aid Strike Team where it sent a team to Southern California.

Due to call volume, the District had zero engines available 14-times which totaled 2:33 hours. During

According to the District, here is a breakdown of the Calls For Service by Station in the month of December:

In the month of December, the District received auto aid from Contra Costa Fire 49-times with them sending a total of 72 engines. Meanwhile the District sent CONFIRE auto aid 26-times for 27 engines

For the full report and the January 8 Agenda, click here.

Rick- your question in a good one. The District recently developed a new website that can be referenced to obtain District: meeting, finance, history and operations or response time information.