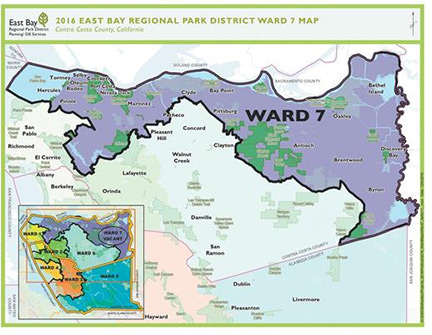 The East Bay Regional Park District Board of Directors announced Friday that they have selected three finalist who will interview on January 31 to fill a vacant seat in Ward 7.

The application process resulted in 20 applicants applying for the seat vacated by Diane Burgis who was elected to the Contra Costa County Board of Supervisors this past November.

The three finalist announced are:

According to the Agenda, the interviews will begin at 1:15 pm and will go through 2:45 pm where the Board will then vote on who will fill the vacancy.

The East Bay Regional Park District Board consists of seven representatives, elected by ward, who are responsible for the policy direction of the Park District. The Ward 7 director position will be up for election in 2018. Board members receive $100 per eligible meeting, up to a maximum of $1,000 per month, and are eligible for benefits.

Regional parks and trails located in these areas include:

For more information on the East Bay Regional Park District, visit them at www.ebparks.org

I know who I wouldn’t want. Good luck picking.