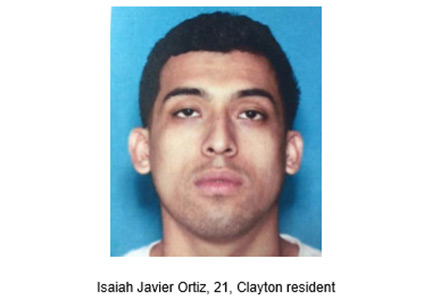 CONCORD, CA – Contra Costa County Fire Protection District (Con Fire) today announced the arrest of a suspect in a series of four suspicious fires along a walking trail in the City of Clayton last month.

The fires in question took place in September in the same general area of a walking trail that ran through dry grass, trees, bushes, and very near homes in Clayton. Each fire had the potential for devastating results as they occurred at the height wildfire season in an area with abundant fuels dried and ready to feed potentially destructive and deadly fires.

The arrested suspect is Isaiah Javier Ortiz, 21, a Clayton resident. Earlier this week, the District Attorney’s Office filed four felonies against Ortiz related to these incidents.

“These crimes put our community at considerable risk at the height of the fire season. The resulting arrest comes as a result of the collective work of our Fire Investigation Unit, Clayton Police Department, and the office of the Contra Costa County District Attorney,” said Lewis T. Broschard III, Fire Chief, Contra Costa County Fire Protection District. “In this District, we take fire investigation very seriously and I am particularly proud of the collaborative effort that has led to this arrest.”

In September 2019, Con Fire responded to four separate vegetation fires in the city of Clayton.  Through thorough investigation, conducted by the District’s Fire Investigations Unit, part of the Fire Prevention Bureau, it was determined early in the series that the fires were likely being intentionally set.  Working with the Clayton Police Department, Con Fire investigators were able to develop leads and locate witnesses, ultimately resulting in the arrest of the suspect.

The suspect is currently incarcerated in the Contra Costa County Sheriff’s Martinez Detention Center pending action on the case by the District Attorney.

Contra Costa County Fire Protection District (Con Fire) — a recognized fire service leader — provides fire and emergency medical services to more than a million people across its 304 square-mile District area, and through mutual aid, in and around the 20 cities and unincorporated communities of Contra Costa County, California. With few exceptions, county emergency ambulance transport services are provided by Con Fire through its unique sub-contractor Alliance model. In 2018, the District responded to nearly 75,000 fire and EMS emergencies and dispatched some 95,000 ambulances, providing expert medical care on more than 74,000 ambulance transports. The District, with 26 fire stations and more than 400 employees, is dedicated to preserving life, property and the environment.