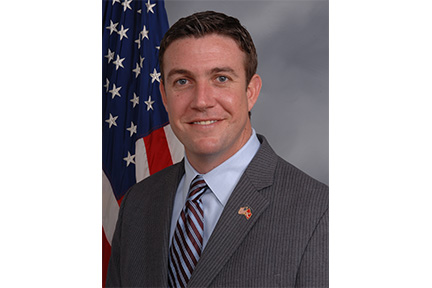 SAN DIEGO – U.S. Representative Duncan D. Hunter pleaded guilty in federal court today to the major count in his indictment, admitting that he knowingly and willfully stole hundreds of thousands of dollars in campaign funds that he and his wife used to maintain their lifestyle.

According to the plea agreement, Hunter and his wife, Margaret, who pleaded guilty in June 2019, illegally converted more than $150,000 in campaign funds from 2010 through 2016 to purchase goods and services for their personal use and enjoyment, and engaged in 30 or more illegal transactions using campaign funds for personal use.

As detailed in the indictment, the Hunters stole money from the campaign for items as inconsequential as fast food, movie tickets and sneakers; as trivial as video games, Lego sets and Playdoh; as mundane as groceries, dog food,  and utilities; and as self-indulgent as luxury hotels, overseas vacations and plane tickets for their family pet rabbits, Eggburt and Cadbury – all while their family was otherwise deeply in debt.

“Congressman Duncan D. Hunter violated the trust of his supporters by diverting hundreds of thousands of dollars they donated in good faith to his reelection campaign for personal expenditures,” said Assistant U.S. Attorney David Leshner. “This was not an accounting mistake by his campaign. This was a deliberate, years-long violation of the law.  Congressman Hunter used the power of his position to fund a lifestyle out of his reach, unwittingly financed by those who put him there.  His guilty plea entered today acknowledges and accepts responsibility for his conduct. Leshner praised prosecutors Phil Halpern, Emily Allen and Mark Conover as well as the Federal Bureau of Investigation for their tireless pursuit of justice in this case.

“Our campaign finance laws are designed to promote transparency in our electoral process by, among other things, prohibiting the diversion of campaign contributions for personal use,” said Scott Brunner, Special Agent in Charge of the San Diego Division of the FBI.  “The FBI will fully investigate any person who blatantly disregards these laws and abuses the trust of constituents and contributors by turning campaign coffers into a personal slush fund.  Today, the comprehensive FBI investigation resulted in Duncan Hunter pleading guilty to a conspiracy with his wife to convert hundreds of thousands of dollars in campaign funds for personal use.”

“Congressman Hunter was indicted—and he pled guilty today—because of his own misconduct, and no one else’s,” said Assistant U.S. Attorney Emily Allen. “This is not a case about mismanagement, or sloppy accounting, or ‘mistakes.’  Duncan Hunter intentionally took money that did not belong to him and used it for his own benefit.  For that, he has been held accountable, and we are pleased that today he has taken this first step toward taking responsibility for his crime.”

Assistant U.S. Attorney Phil Halpern said: “The foundation of our legal system is based upon the proposition that no one individual is above the law, regardless of the heights they’ve reached, how much they’ve contributed, or what office they occupy. Today’s disposition ensures that the rule of law remains pre-eminent in this country and that Mr. Hunter both acknowledges and is held accountable for his role in stealing hundreds of thousands of dollars in campaign funds.”

As detailed in the indictment, beginning no later than 2010 and continuing up to and including at least 2016, Duncan and Margaret Hunter agreed to use campaign funds for their own personal benefit and enjoyment—and to spend freely from Hunter’s campaign donors’ funds. Many of the Hunters’ personal outings with family or friends (which as detailed in the indictment included trips to the Del Mar racetrack, dinners or drinks with friends, family and “couples” vacations, golf outings, and a weekend-long bachelor party) should not have been paid for with campaign funds. Among their improper spending, the Hunters paid $2,448.27 in campaign funds in August 2011 for a “couples” vacation in Las Vegas, Nevada, which Hunter concealed by falsely reporting to the campaign treasurer that the expenses were all  “campaign related.”

Previously, Hunter’s wife, Margaret, publicly acknowledged that these types of improper expenses went on for years and included spending as flagrant as: (1) $100.69 on November 16, 2013 at Casa De Pico in La Mesa to take their family and close friends out to dinner in relation to a sporting event featuring one of the Hunters’ children; (2) $1,489 on June 28, 2014 to treat their good friends to dinner at the Studio restaurant in the Montage Laguna Beach resort, and for room service, drinks, and meals the next day for the Hunters by themselves; (3) a family trip to Disneyland on September 26, 2015, which included $229.44 at Disneyland’s Star Trader shop for Minnie Mouse ear headbands and Star Wars-themed clothes for the Hunters’ children; and  (4) $669.07 on March 27, 2016 at the Hotel del Coronado for a family Easter Sunday brunch in the Crown Room that the Hunters recognized was well outside their budget.

In her plea agreement, Margaret Hunter specifically acknowledged that she and Duncan Hunter used campaign funds to secretly make thousands of dollars in improper personal purchases (including family vacations, household goods and groceries, restaurants and bar tabs, a bachelor party, gas, fast food, retail shopping, cash withdrawals, a garage door, and personal Uber rides, among others) which they continued to disguise as campaign-related expenses.

The indictment also details how Hunter aided his malversation by repeatedly providing his wife with a campaign credit card despite the advice from his treasurer that he not do so.  Similarly, Hunter – against the advice of his campaign staff and congressional office staff – installed Margaret as his paid campaign manager on two separate occasions with full knowledge that she was misappropriating campaign funds in order to finance their personal lifestyle.  When discussing her appointment as the salaried campaign manager for the second time in 2014, Margaret observed that Hunter “need[ed] the extra money as much as I do[.]”

According to documents previously made public, the Hunters used campaign funds improperly on a number of family vacations, including:

The indictment also highlights how Hunter turned to campaign funds because his family’s finances were in constant disarray.  During the course of the conspiracy, the Hunters overdrew their bank account more than 1,100 times in a seven-year period resulting in $37,761 in “overdraft” and “insufficient funds” bank fees.  Their credit cards were frequently charged to the credit limit, often with five-figure balances, resulting in an additional $24,600 in finance charges, interest, and other fees related to late, over the limit, and returned payment fees.

According to the indictment and other publicly filed documents, Hunter and his wife both recognized that campaign funds were being spent on personal activities. For example, after returning home from their Boise and Las Vegas vacation, Duncan and Margaret Hunter discussed how the campaign card had been declined as the family had “racked up a $600 minibar…and more charges at Caesars…” as well as a $200 family breakfast, the “kids room service” and pool drinks, and gift shop purchases.  And, despite falsely telling the campaign treasurer that the various charges related to their 2015 Italy vacation “were mostly military/defense meet related,” Margaret Hunter emailed a friend that “Italy was amazing.  Truly our best family trip so far.  Like that saying ‘if traveling was free you’d never see me again’!”