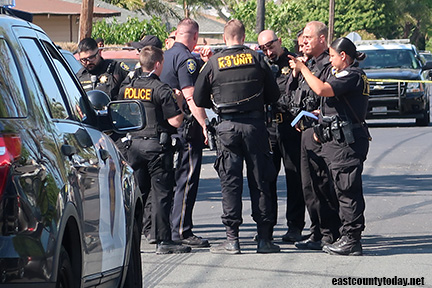 On Monday, Assemblymember Reggie Jones-Sawyer introduced a bill that would require anyone who wants to become a police officer get a bachelors degree or turn 25 before they can begin their career.

According to Assembly Bill 89 (AB 89), it aims to introduce minimum qualifications for police officers and standards.

Within the bill, it states during the years 2014–2018, only 8.7 percent of the police force was 25 years of age or younger and nearly 30 percent of those officers had a bachelor’s degree, suggesting that limitations on the age and education of officers would not significantly affect the available workforce.

More micromanaging of the police force. This is not going to end well at a time more police are needed.

It is called a police academy. If one passes the academy, at any age, they should be allowed to work in their desired career.

Freaking Democrats…no common sense what so ever.

This is the stupidest thing ever … like the guy above ITS CALLED A POLICE ACADEMY FOR A REASON AND YOUR MESSING WITH PEOPLES CAREER IF YOU PASS THIS STUFF….. JUST THE DEMNAZIS TRYING TO CONTROL EVERYTHING . People can’t afford to make 18.00 or lower until 25 years of age and people can’t afford to go to college or be stupid and get loans ….. STOP THE LIBTARDS NOW OR CALIFORNIA IS GONNA BE NAZI GERMANY.

As a person who has worked as a police recruiter and hired several officers for over 20 years. The age difference normally equates to the life experience/ maturity. Officers with limited life experience have a hard time adjusting to the level of power that comes with a badge and gun. On the other hand a degree does not mean life experience, it simply means “ I can pass tests and I graduated from college “ We all know people with degrees that are simple minded. We also know people with common sense and a ged that are brilliant. Life experience for an officer should include customer service, working with diverse work groups and a willingness to hold ALL people accountable. Sadly officers of ALL ages are not consistently applying the law as they should, regardless of education.

Cops need bachelor degrees to get into the academy. Well, their salaries will go up big time then as well. Everything the democrats touch, they f**k up.

You are absolutely right. By all means, let’s keep on hiring macho, uneducated knuckledraggers as cops. Why should we hire people who know how to deal with situations without resorting to trigger pulling as the first response? Education is for wimps

These politicians are getting nutttier than a fruit cake. They have no sense.. dumb and dumbest..

I think it’s a great Idea!

Age usually comes with maturity (not in all cases). Education or Bachelors Degree does not equate to the intelligence necessary to work the streets and deal with societies problems and violence!
Bachelors Degrees can be useful in police administration & resources at a command level.
What the public needs is a well rounded police officer that is physical fit, mentally sound, and has the ability to make split decisions in less then a half a second. There is no educational component or degree that will insure a successful career in law enforcement. I am not dismissing education; because education is a valuable component for any individual to posses. A Junior College A,A, would be more appropriate for an entry level Law Enforcement job.

This bill is just another politician promoting a bill; which is not even relevant to to policing or benefiting our society. Research the authors of Assembly Bill 89 (AB 89) this is a political move that means nothing; yet the authors will get a political point or feather in their cap for proposing this bill during a time when politicians are pushing police reform.

If politicians would promote and educate their constituents on respecting others and follow the laws in our society; the likely-hood of a bad or negative police encounter is almost zero.

C’mon LoveableCurmudgeon Your account of Law Enforcement is a bit embellished/magnify beyond the limits of truth.

Just go read the report here on ECT of the young woman on HWY4. who was in an auto accident; the occupant of the other car got out and shot at her striking her vehicle (read it). If that was your daughter being shot at for being evolved in an accident; by an armed violent thug. Would want that “gung ho, wanna kick ass, types” or your educated analyst? Going after an armed gunman who is not concerned about shooting at a people is Violent! You need a special kind of somebody to do the job of Law Enforcement.

If you read the article it sounds like the police did an excellent job “No macho, uneducated knuckle draggers”.
Gun and Thugs in custody. Our community, friends, and family safer today because of Law Enforcement; Professional AF.

So if you have any common sense you would realize how much nonsense your comments are. Sure if there is a bad apple throw it out.

Sorry, Joe Sal. I have had too many experiences of overbearing, thuggish, people, dressed in police uniforms, who delight in knocking folks around, rather than attempting to defuse a situation

You drank the radical liberal, anti-establishment, authority-hating Kool Aid in thinking this a meaningful proposal. College or age does nothing to identify the proper people to become law enforcement or any other type of first responders.

In CA we already have some of the strictest hiring practices, background investigations, polygraph exams, and psychological exams combined with rigorous field training to ensure the proper heart and mindset of our law enforcement (and firefighters). Most agencies already require or at least prefer a college graduate.

From firsthand experience, I have seen at least two PhD’s that wanted to “dabble” in law enforcement. Their demeanor and aptitude for dealing with the job at hand determined they may be brilliant people, but had no business being cops. Both failed in their endeavors. On the flip side, I have seen “uneducated” (i.e. no sheepskin hanging on a wall) be the most compassionate, fair, and level-headed cops I’ve ever had the pleasure to know.

This is just more anti-cop rhetoric wrapped up in new varnish.

While I would never factor my observations if I dealt with you on the street, I personally find your mindset (off duty) as hateful, uneducated, biased, and reprehensible.

Hmmm. I have mixed feelings about this. People are individuals, and the age discrimination fails to recognize that, instead painting all under-25-year-olds with the same broad brush as inherently less qualified. I’m also not a fan of credentialism. Do we really want more incentives for individuals and families to throw their money at overpriced universities in the grip of far left political correctness and identity politics?

The counter-argument would be the “practical” consideration that younger police officers do tend to be disproportionately hot-headed compared to their more seasoned colleagues, and that, in the case of future police officers, more exposure to the liberal atmosphere of academia might actually tend to do them some good.

Still, I’m not sure I can support the bill, let alone get enthused about it. Milquetoast measures like this must not be allowed to dampen the energy or momentum for more substantive police reforms. What’s really needed (short of strong libertarian solutions like abolishing government police or at least all the victimless “crime” laws they’re expected to enforce) is a complete overhaul of police academy training. Make it transparent and open to the public, and design it to weed out the thuggish, yahoo types who want to be police officers because they enjoy being bullies and telling other people what to do.