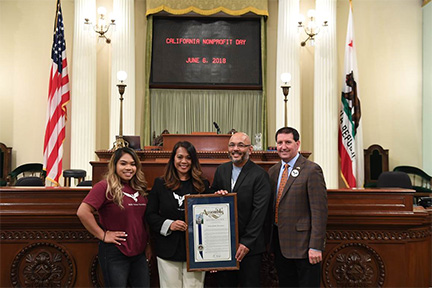 SACRAMENTO – On Wednesday Assemblymember Timothy S. Grayson (D-Concord) presented a resolution honoring the Robby Poblete Foundation, which is working to fight the problem of gun violence that is ravaging our communities, as the 14th Assembly District’s Nonprofit of the Year during a ceremony at the State Capitol.

“The Robby Poblete Foundation is taking an extraordinary stand against gun violence in the East Bay area by taking unwanted guns off the streets, transforming them into instruments of hope and peace through its arts program, and providing vocational opportunities to underserved populations,” said Assemblymember Grayson. “I am honored to present this resolution to the Robby Poblete Foundation’s executive director, Pati Navalta Poblete, in recognition of the foundation’s successful efforts to improve our community.”

Pati Navalta Poblete founded the Robby Poblete Foundation and named it in honor of her son, Robby, who was killed by gun violence in Vallejo in 2014 at the age of 23 during what police suspect was a robbery. In less than a year, the foundation has helped take more than 250 unwanted firearms off the streets through gun buyback programs and is already set to hold three more gun buybacks this year.

“I knew that the success of our nonprofit would depend greatly on the support of our community leaders,” said Poblete. “It wasn’t enough for us to say that gun violence is an issue plaguing our communities, or that by offering people opportunities in vocational jobs we could reduce crime. We needed our community leaders to understand and agree with our mission so we could move the ball forward. Assemblymember Grayson was one of our first supporters, and because of the backing of officials like him we have already impacted so many lives. We are honored to be his choice for Nonprofit of the Year.”

Last month, Assemblymember Grayson attended the foundation’s inaugural “Art of Peace” exhibit in Vallejo, which featured artwork crafted from firearms that the foundation had collected through its gun buyback programs.