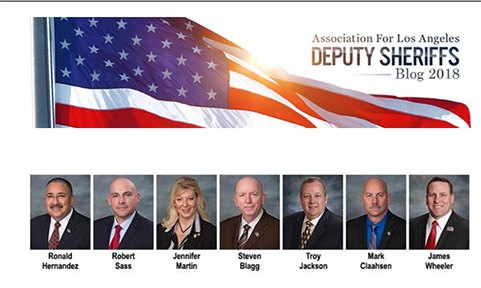 The murder of a law enforcement officer has been one of the “special circumstance” categories that makes a defendant eligible for the death penalty ever since capital punishment was reinstated in California in the 1970s. It recognizes that those who were murdered in the line of duty are murdered because they represent society, and the murderous attack is an attack on society. With the recent sentencing of an unrepentant killer who took the lives of two Sacramento-area deputies, there are now 44 individuals on California’s death row for the murder of a deputy sheriff or police officer.

ALADS supports Contra Costa County Deputy Sheriffs’ Association President Sgt. Shawn Welch’s stance and statement. Sgt. Welch called the comments “archaic” and “extremely inappropriate.” Sgt. Welch spoke for the law enforcement community when he added, “Law enforcement officers are hired to ensure the public’s safety and enforce the constitution and laws of the state. We are not pawns for a brutal dictator. Strauss’ performance last night should have made it clear to anyone voting in the primary election that he should not even be on the ballot for district attorney.”

In an eloquent column recently published following the murder of a Dallas police officer, columnist Jacquielynn Floyd observed , “Yes, there are lot of police officers in this country, and theirs is a risky job. It’s too easy to forget that they assume this risk on our behalf — until it costs a life.” She then went on to write: “But the murder of a police officer — like the murder of a child — still leaves us shaken, destabilized. There’s a reason both of these are capital crimes in the state of Texas. In the case of children, we’re heartbroken by their innocence. When it’s cops, we’re unsettled because we’re temporarily reminded of their willingness to accept risks that most of us would not.”

A person who fails to understand the sentiments expressed by Ms. Floyd, and instead dismisses a peace officer’s murder as a “risk they take,” should never be elected District Attorney.