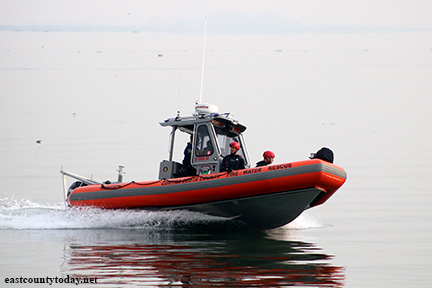 At 1:25 pm Friday, the US Coast Guard along with Contra Costa County Fire Boat 85 responded to a report of a boat fire on False River.

By 2:00 pm, Fire Boat 85 arrived on scene to a 40-ft boat with heavy smoke coming a deck below. They reported that 6-people on board were already on a US Coast Guard Boat and they were beginning a defensive fire attack. They confirmed the incident occurred on False River near Jersey Island Road.

It was reported that all 6-occupants of the boat did not need any medical attention. Battalion 5 was requested along with a second engine to the levee as a precaution–Engine 53 from the East Contra Costa Fire Protection District was dispatched.

By 2:23 pm, firefighters reported the fire  started in the engine room, possibly electrical fire as nothing was running at the time the fire started and stated there were still some hot spots.

By 3:00 pm, the fire was deemed out and were in overhaul.