For the second time in as many months, the East Contra Costa Fire Protection District will be sending a strike team out of District to assist other agencies in fighting fires. 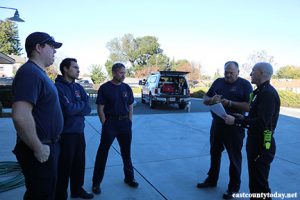 The crews were assigned to structure protection for both residential and business structures and could be in Los Angeles County for up to 14-days before returning home.

“There was three major fires, one in Ventura and two in Los Angeles County,” stated Battalion Chief Ross Macumber.  “This is only the second strike team that we will have sent out in 10-years, the first one we went on was the north bay fires which were very devastating.”

Macumber add that they were able to get a team together quickly because lot of guys stepped up and wanted to go to help out—two engineers were sent to help prevent driver fatigue with the long trip. 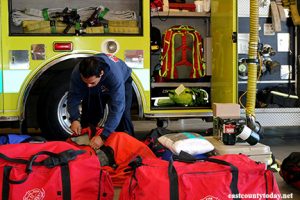 “We have a lot of guys who want to go, they want to step up and go,” said Macumber. “We don’t want to hamper our personnel and not send them. They want to go, we want them to go. We ask for a lot of help within this district and we feel it’s time to give back some of that help and we are in a position to do it.”

For East Contra Costa County, sending a strike team out of area will not reduce services as the District will continue to operate in a 3-station model as off-duty firefighters will pick up extra shifts to backfill open positions.

As the strike team send back updates, we will continue to keep you informed here and on our other social media platforms.

ECCFPD Fire Chief Brian Helmick was pleased to see his crew get a nice assignment for the first day noting they fight to protect all forms of life and structures.

“In a fire of this kind of magnitude with thousands of firefighters assigned, crews can get assigned to almost any type of structure to protect business found within the effected geographical areas,” said Chief Brian Helmick. “When it comes down to life, property and environment, it’s always not just human life that we are called to protect to the best of the ability’s.”

Helmick added that the needs today may not be the same tomorrow and its fluid of where our firefighters will be positioned in Southern California.

I hope we don’t short our district sending four firefighters away for two weeks. There are thousands of fire departments in better shape than ours. I see on the strategic plan we were not covered on several occasions. I hope sending four fire fighters away will not put us in a no coverage situation locally. We have only three stations of what was eight. Be safe down there we need you back.

American ….. California is ONE STATE —- or did you not learn that in your history and geography class in ELEMENTARY school? Firefighters are sent to various parts of OUR ONE state! Capische?

American – Did you read the article? Off duty firefighters will pick up extra shifts. It’s human nature to want to help out with the fires in Southern CA. If they lack the desire to help others, we don’t want them as firefighters.

Nick, Have you followed the history of our fire district woes. Lack of personnel retention , no funds, five stations closed, and more. I completely agree with what you are saying. What needs to be considered is our local coverage. Your off duty fire fighters are being paid. Your off duty firefighters more over will miss local shifts. Who pays the overtime to cover their shifts? You need to think a bit past the glory of a strike team and focus here on this District’s situation. When our district is fully staffed and funded, sending an engine and crew would proudly done. Doing this now is a slap in the face to Bethel Island, Knightsen, and Oakley residents. I’m just saying let’s get our house in order and safe before we loan out a very limited supply. Working the on duty firefighters to exhaustion to get some news publicity is foolish just like a 15 minute response to BI is.

It’s part of the mutual aid master agreement that ensures state-wide support for natural disasters like fires and earthquakes. When Mt. Diablo burned a few years back, we had strike teams ready to respond to our area from all over the state.